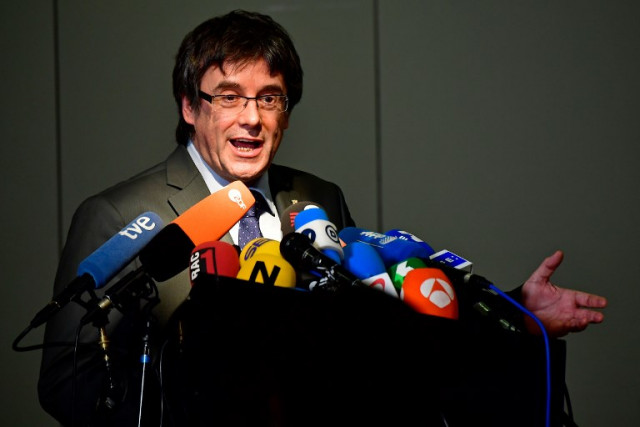 Spain’s Supreme Court on Tuesday ordered former Catalan president Carles Puigdemont and five other separatists be suspended as regional lawmakers after concluding a probe into their secession bid.

In a statement, the court said Judge Pablo Llarena had ordered “the suspension of… Carles Puigdemont and the other five lawmakers accused of the offence of rebellion.”

A total of 25 separatist leaders are under investigation for their involvement in a failed independence declaration on October 27, which prompted Spain’s then government to sack the regional executive and impose direct rule on Catalonia.

This was only lifted last month when a new separatist executive took office in Catalonia after snap regional elections in December voted pro-independence parties back into power.

Nine are in preventative custody in Spain while four others fled abroad and are wanted by Spanish courts.

While they could not take part in parliamentary sessions in Barcelona, the six lawmakers kept their posts after being elected in the December polls, delegating their votes to party colleagues.

With the suspension, Catalan separatist parties will have to replace them if they want to maintain their absolute majority of 70 of the parliament’s 135 seats.

“This decision highlights the quality level of the state’s democracy,” Puigdemont tweeted.

“Citizens’ votes, shattered by a ‘justice system’ that continues to engage in politics.”

The court’s ruling comes a day after Catalonia’s new separatist president Quim Torra met Spanish Prime Minister Pedro Sanchez, with both pledging to ease tensions despite divergences over the region’s right to self-determination.

Now that the court’s probe is over, a trial is inching closer. Spanish media say it could take place in October.