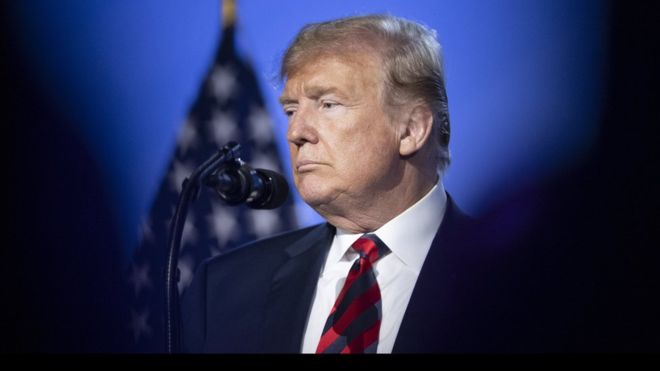 Donald Trump has raised questions about whether the UK’s current Brexit plan is “what they voted for”.

The US president said “Brexit is Brexit” but it was turning out “a little bit differently” with the UK “partially involved” with the EU.

“Maybe they’re taking a little bit of a different route,” he went on.

His comments at a press conference in Brussels came ahead of his visit to the UK – and as details of Theresa May’s Brexit plan were published.

Asked about his remarks, Mrs May said her plan “absolutely delivers on the Brexit people voted for”.

Mr Trump backed a Leave vote ahead of the 2016 EU referendum, when he was a US presidential candidate, and he was asked for his views at the Nato summit press conference.

“It’s not for me to say,” the US president said.

“I’d like to see them be able to work it out so it can go quickly, whatever they work out.”

Mrs May is under pressure over her proposals for how the UK and EU could trade together in years to come, with senior ministers Boris Johnson and David Davis having resigned, saying they cannot support the proposals.

The EU’s chief negotiator, Michel Barnier, has insisted the proposals must be workable.

The two sides are negotiating outstanding issues related to its departure as well as the outline of their future relationship once a proposed transition period comes to an end, on 31 December 2020.

Both are aiming for an agreement by October, to allow enough time for the UK and European parliaments to vote on what is decided.

The EU’s chief Brexit negotiator Michel Barnier said the UK initiative needed to be compatible with EU guidelines and not create extra costs and red tape.

He said: “We will look carefully at each and any proposal of UK, but these proposals must be workable.”

Why is this document so important?

It lays out how the UK would like to trade and co-operate with the EU for years and decades to come.

The White Paper, reportedly delayed for several months amid disagreements between ministers, was finally approved by Theresa May’s cabinet at her country residence, Chequers, last week.

The main points are:

Mr Raab, who became Brexit secretary on Monday after David Davis quit in protest at the plan, said it struck the right balance between protecting existing arrangements with the EU and freeing up the UK to look further afield.

Speaking on BBC Radio 4’s Today programme, he defended what he said was a “credible but innovative approach” to the “technical challenge” of leaving the EU’s customs union while maintaining frictionless trade across borders.

And he told people who are “criticising or carping” about the plan that they needed to come up with credible alternatives of their own.

This is not the final deal, as the detailed talks are yet to take place with the EU on it. The EU has welcomed its publication and said it will respond when it has seen the plans in detail.

Are the Tories united behind this?

The plans being set out in the white paper have already triggered two cabinet resignations.

In his resignation letter, Foreign Secretary Boris Johnson warned the “Brexit dream was dying”. Mr Davis said the proposals were a “compromise too far” and was “giving away too much too easily” and would effectively mean the UK remaining in the EU.

A handful of ministers below cabinet level have also quit in protest and, amid claims No 10 has taken control of the process and marginalised the Brexit department, there has been talk of other resignations unless the government rethinks its plans.

Many Brexit-backing Tory MPs are worried the proposals will inevitably be watered down during the negotiations and the UK will have to accept further concessions.

There are also those who backed Remain in the referendum and argue the proposal is the “worst of all worlds” in that the UK would remain tied to the EU without having any say in how it operates or makes new laws.

Leading Brexiteers who have stayed in their jobs insist it is consistent with what people voted for in 2016.

“What we were asked to do was have no free movement, no EU jurisdiction, no continued payments to the EU, no customs union and no single market,” International Trade Secretary Liam Fox said on Wednesday.

What are others saying?

Labour has said the plan is a fudge already starting to unravel.

It wants the UK to stay in some form of customs union with the EU and for European citizens to get preferential treatment under new migration rules.

Labour chairwoman of the Home Affairs Committee, Yvette Cooper, said the government’s Chequers agreement “as it stands” would not be approved by Parliament partly, she argued, because it does not include a customs union.

Business, which has been calling for greater clarity for months, has welcomed the plans for close alignment over goods. But some remain unconvinced about how the customs plans, which ministers hope will avoid checks on the border between Northern Ireland and the Republic of Ireland, will work.

At a Commons hearing on Wednesday, Mr Fox conceded they had “never been tested before” and it was unclear whether they would be acceptable to the World Trade Organization.