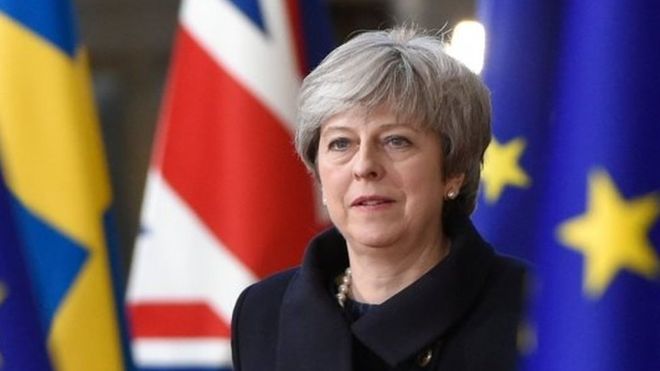 The government has published its blueprint for UK relations with the EU, with Theresa May saying it “delivers on the Brexit people voted for”.

But Tory Brexiteer Jacob Rees-Mogg said it was a “bad deal for Britain”.

The long-awaited White Paper is aimed at ensuring trade co-operation, with no hard border for Northern Ireland, and global trade deals for the UK.

It fleshes out the Chequers agreement that sparked the resignations of Boris Johnson and David Davis.

The UK is hoping the EU will back the proposals in the White Paper so an exit deal can be struck by the Autumn, ahead of the UK’s official departure from the EU in March.

What the government says

New Brexit secretary Dominic Raab, formerly a leading figure in the Leave campaign, said the White Paper was a blueprint for a “principled, pragmatic and ambitious future partnership between the UK and the EU”.

“Now, it is time for the EU to respond in kind, we approach these negotiations with a spirit of pragmatism, compromise and, indeed, friendship, I hope. I trust that the EU will engage with our proposals in the same spirit,” he told MPs.

Asked in Brussels about US President Donald Trump’s claim that the British people were not getting the Brexit they voted for, Mrs May said: “We have come to an agreement on the proposal we are putting to the European Union which absolutely delivers on the Brexit we voted for.

“They voted for us to take back control of our money, our law and our borders. That is exactly what we will do.”

What the Brexiteers say

“It is a pale imitation of the paper prepared by David Davis, a bad deal for Britain. It is not something I would vote for, nor is it what the British people voted for.”

Fellow backbencher Sir Bill Cash, who chairs the Commons European Scrutiny Committee, told ministers he was “deeply worried” by the White Paper, because it could result in the UK continuing to accept EU regulations on trade in certain goods.

The reaction in Brussels

The EU’s chief negotiator Michel Barnier said he would analyse the details with the European Parliament and member states and was “looking forward” to negotiations with the UK next week.

CBI director general Carolyn Fairbairn said “many of the intentions are reassuring” but “there are gaps in these proposals and more detail is needed on EU VAT, some services sectors and the new customs system”.

“It’s vitally important UK negotiators get their heads down and work with businesses to grapple with the detail and get it right,” she added.

Federation of Small Businesses national chairman Mike Cherry said: “With just 37 weeks before we leave the European Union, we need to see tangible and comprehensive details on these proposals and how they will impact small businesses.”

“We will clearly lose business, some business, to Europe. But I think the City will adjust and find a way forward.”