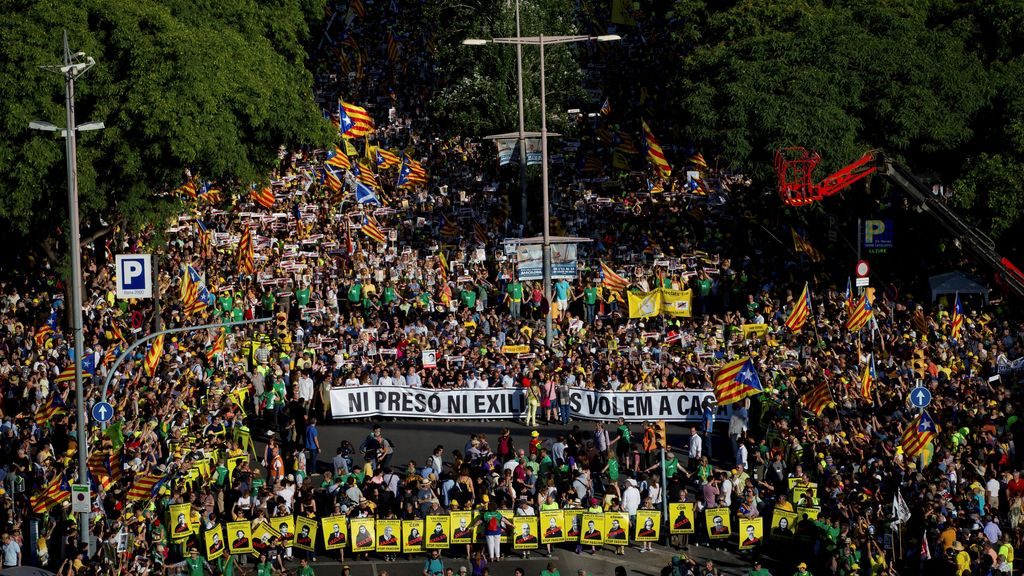 Thousands of Catalans protested Saturday in Barcelona for the release of separatist leaders held over their role in the region’s secession bid and the return of those who fled abroad into self-exile.

Catalonia’s pro-independence president Quim Torra took part in the march just a day after he met Spanish prime minister Pedro Sanchez, with both pledging to ease tensions even if their positions on self-determination remain very different.

“Every minute that our prisoners are in prison and aren’t at home with their family, with their friends is a real political indecency and we won’t allow it,” Torra said before the march set off early Saturday evening.

The protest comes after nine Catalan leaders who were being held near Madrid were transferred to prisons in Catalonia closer to home, in a bid by Madrid to further calm the situation.

But for protesters this was not enough.

Waving yellow, red and blue Catalan separatist flags, they held banners that read “Freedom for political prisoners” or “we want you back home”.

Accused of rebellion along with deposed, self-exiled Catalan leader Carles Puigdemont for their role in the region’s failed secession bid in October 2017, those in custody face up to 25 years in jail when their case finally comes to trial.

But a development this week raised questions over whether they can be tried on such a severe charge.

On Thursday, a German court said it would allow the extradition of Puigdemont to Spain, but only for misuse of public funds — which he is also wanted for — and not rebellion.

The court argued that the closest legal German equivalent, high treason, did not apply because Puigdemont’s actions were never accompanied by violence.

European legal practice stipulates that the receiving country — in this case Spain — can try the accused only on the charges approved in the extradition order.

This means the Spanish Supreme Court in charge of the case will not be able to try him for rebellion.

So the nine separatists in jail in Spain could argue that given Puigdemont, who was Catalonia’s president, cannot be tried for rebellion, then neither can they.