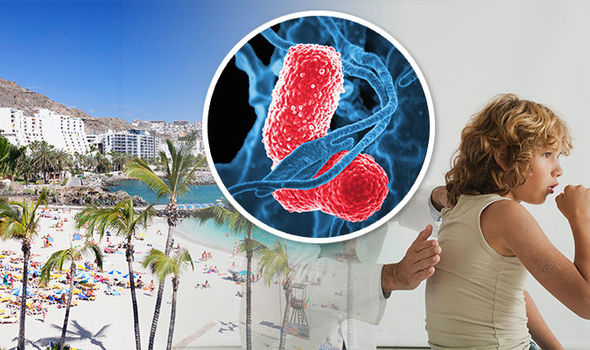 Spain holidays are at risk this summer for British tourists as a bacteria outbreak, which is resistant to a number of antibiotics, has spread across the Canary Islands, which could cause health problems such as pneumonia and meningitis.

Holidays to Spain are under threat as a bacteria outbreak sweeps the Canary Islands.

A warning from the European Centre for Disease Prevention and Control has advised that 13 tourists have already been hit with the Klebsiella pneumoniae bacteria.

They warn that it is a potential epidemic situation after the tourists – primarily Swedish and Norwegian – were affected.

It can be passed on by direct contact so can easily spread through busy resorts in the Spanish region.

The bacteria can cause pneumonia, bloodstream infections or meningitis, according to the gov.uk website.

The ECDC stated there is a “high risk of spreading and outbreaks if the traveller gets it, but it is not detected, and then is admitted to hospital once back home”.

The affected tourists flew home between New Years and April after falling ill, which is how it could potentially spread across Europe.

Symptoms that tourists should look out for include; chest pain, fever, sweating, and fatigue.

If they have any of the symptoms they should seek medical help immediately.

Infections from the Klebsiella bacteria are also known to be resistant to a wide range of antibiotics such as amoxicillin.

The UK Foreign Office has yet to update their travel warning, although warns British tourists to always have their EHIC card on them as well as travel insurance.

EHIC cards do not cover repatriation or private care when in Europe.

The FCO also warn to check six weeks before travelling to Spain if any vaccinations are needed.

The Canary Islands are some of the most popular destinations for British tourists, as more than 16 million visit Spain every year.

Yet the islands have been hit with a number of travel worries recently, such as volcano eruption threats and cancelled flights.

In May, 270 earthquakes hit the Canary Islands in just ten days.

This sparked concerns that Mount Teide volcano on Tenerife could explode.

It last erupted in 1909, although scientists played down fears and advised that small earthquakes in the region are common.

In February, more than 60 flights were cancelled to the Canary islands due to high winds and rain.

Thousands of travellers were left stranded at the airport overnight as wind speeds of up to 70mph were recorded.