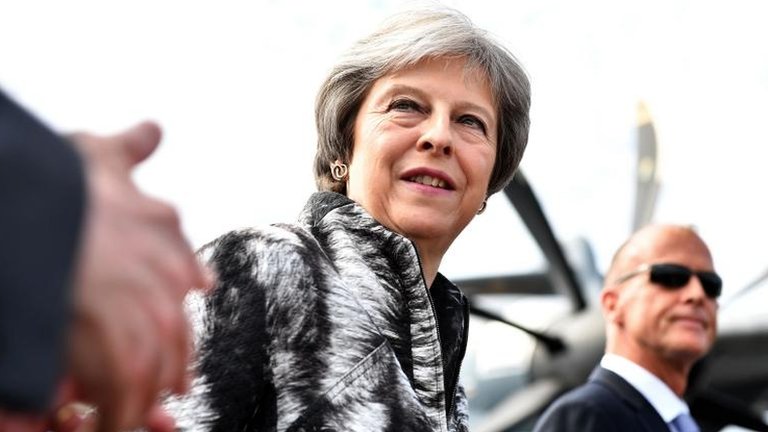 Theresa May has promised extra investment for the aerospace industry, just weeks after Airbus threatened to reduce its UK presence because of Brexit disruption.

The prime minister also said that her Brexit plan would secure millions of aviation jobs in Britain.

It comes amid growing criticism of her plan from MPs, with another government member resigning in protest on Sunday.

The proposal urges close links with the EU on trade in goods, but not services.

In a speech at the Farnborough Airshow on Monday, she offered more than £300m of government and industry money for several projects, including research on more environmentally-friendly aircraft.

There will be additional money for two new spaceports – one in Cornwall, one in Scotland – and a long-awaited commitment to build a new high-tech fighter aircraft that will eventually replace the Eurofighter Typhoon.

The UK aviation sector generates turnover of about £60bn and supports almost a million jobs. British aerospace exports alone were worth £30bn in 2017.

However, industry trade association ADS has warned the sector could be paralysed if Britain leaves the EU customs union and single market, given its dependence on cross-border trade in components.

In June, Airbus UK boss Tom Enders said it could pull production out of the UK if it quit the bloc without a transition deal. The French firm employs about 14,000 people in Britain.

But in an interview with the BBC, the boss of Airbus’s arch-rival, Boeing, pledged to keep investing in Britain.

Dennis Muilenberg said while the company did not welcome disruption to the movement of goods – or to the Europe-wide systems of aviation regulation – his company’s plans would not be changed by the UK’s plans to leave the EU.

“We are going to continue to grow in the UK,” he said, adding that Boeing would maintain a long-term view of its UK investments, “regardless of how Brexit plays out”.

However, he added there were worries over whether “we continue to see free flow of goods and services”.

In her speech, Mrs May argued that her proposals – including frictionless free trade in goods and the avoidance of a hard border in Northern Ireland – would protect the supply chains that big aerospace firms depend on.

She also said the UK could remain part of EU agencies critical for the aerospace industry, such as the European Aviation Safety Agency.