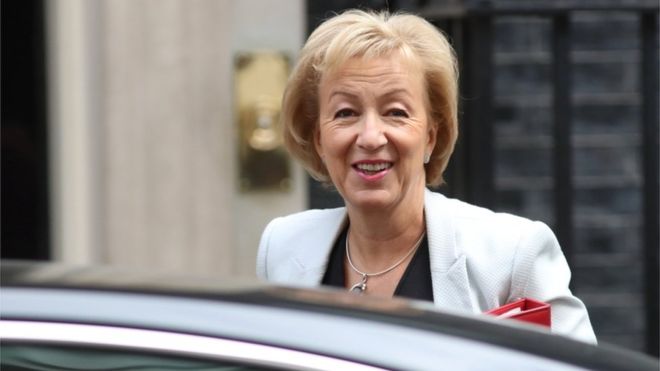 Brussels must be told that the prime minister’s blueprint for future UK-EU relations is “the final offer”, Commons leader Andrea Leadsom has said.

Mrs Leadsom told The House magazine the Chequers plan must be taken seriously or the EU risked a “no deal” Brexit.

Boris Johnson and David Davis quit the cabinet over the prime minister’s plan.

Theresa May has denied claims the trade proposals were “dead in the water” after accepting Brexiteers’ changes to the Customs Bill this week.

The UK is due to leave the EU on 29 March 2019 but has yet to agree how its final relationship with the bloc will work.

After a meeting of the cabinet at Chequers, last week the government published a White Paper setting out its preferred trading relationship with the EU.

The UK is hoping the EU will back the proposals so an exit deal can be struck by the autumn, ahead of the UK’s official departure from the EU in March.

But the proposals, including a “common rule book” between the two sides, angered many Tory MPs.

Mrs Leadsom, who campaigned for a Leave vote in the 2016 EU referendum, told The House the prime minister was “planning to engage quite strongly” with Brexiteers over the next few days to “help them to understand” why the Irish border is a serious issue.

She said it was incumbent on the government to “make the case” for the Chequers agreement – but that the EU must know that it was a final offer.

“The EU has simply not taken us seriously so far in terms of the future agreement.

“What this deal does is it says to them, ‘right, now we can have a free trading area where there won’t be the need for border checks and controls’.