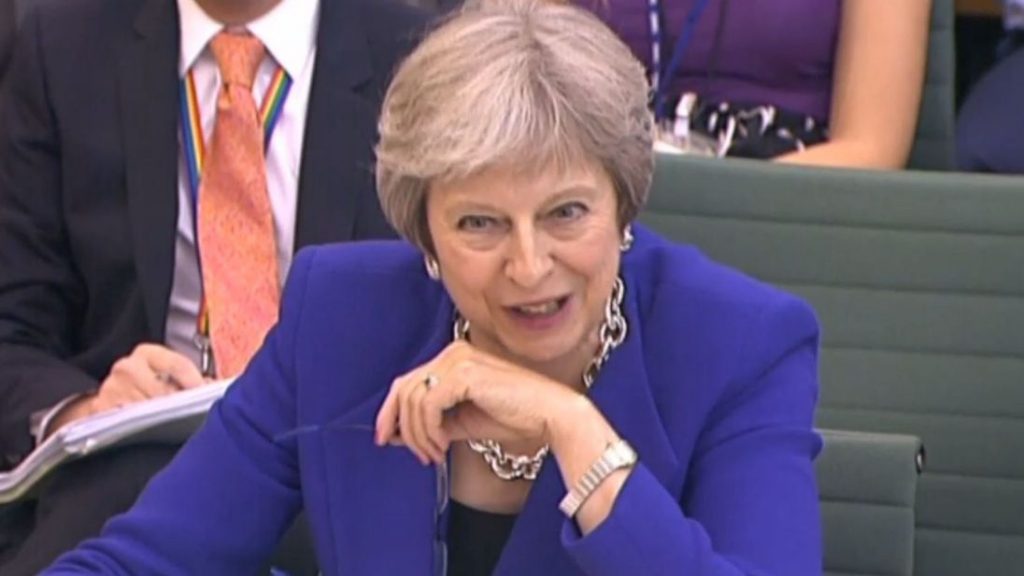 The PM has been boosted after a Tory Brexiteer withdrew his no-confidence letter in her premiership during a gathering of MPs.

An immediate threat to Theresa May’s premiership appears to be subsiding after a Tory MP withdrew his letter of no confidence in the prime minister.

Other Brexiteers also appeared to be rallying around Mrs May, despite this week’s ever-deepening splits between Tory Leavers and Remainers, with one describing a “warm response” for the prime minister as she addressed the meeting on Wednesday evening.

The prime minister was met by table banging as she entered the gathering in parliament, with a similar scene also marking her departure.

Cabinet Office minister David Lidington described the gathering of Tory MPs and peers as “very supportive” of Mrs May, adding: “Everyone is coming to their senses.”

It was recently reported the current tally had reached around 40, amid intense anger among Tory MPs at Mrs May’s Brexit strategy, as agreed by ministers at a Chequers away day earlier this month.

Revealing why he had withdrawn his own letter, Mr Clarke insisted he continues to have “concerns about aspects” of the Chequers plans, but had been “thinking as hard as everyone needs to about where the Conservative Party is going in the last few days”.

He told Sky News: “I’ve come to the conclusion the prime minister deserves the chance to deliver the deal which we all, in the end, want to see.”

Describing the events of Wednesday’s “packed” gathering of around 170-180 Tory MPs and peers, Mr Evans told Sky News: “When the prime minister came in she had a warm response.

“She spoke about all the things that she’s been doing on the domestic front, never mind Brexit. And she said ‘can you imagine when Brexit’s out the way, what we can really then achieve’.

“We’re a family in the Conservative Party and, as we know, within families you get squabbles.

“But, what was said time and time again was ‘we can do this in a dignified way, we really don’t like the blue-on-blue attacks and that has to stop’ and I think everyone got the message there.”

However, former Brexit minister Steve Baker, who quit the government in protest at the Chequers plan, sent a warning to Mrs May as he claimed there were substantially more than 40 MPs opposed to her strategy.

He said: “A number of 40 has been bandied around in this House in the last few days – I’m sorry to say, it gives me no pleasure to say it, but the thing I have to say is ‘and the rest’.

“The people who have said the number 40 are not out by a fraction when they come to consider the number of members who don’t like this deal on these benches and are willing to vote in line with that dislike, they are out by a factor.

“People must face up to the difficult truth that a Brexit which requires a high degree of permanent alignment to the EU will not go through this House of Commons. It will fail.”

Prior to the meeting, Mrs May was asked by reporters gathered outside whether she would be catching up on Boris Johnson’s resignation speech to the House of Commons, which she had missed.

She replied drily: “I’ll be doing my Red Box.”

Made up of the chairs of the House of Commons’ select committees, Mrs May told the group of MPs a large number of documents setting out what is needed to be done by businesses and households in a “no deal” Brexit would soon be published.

She said: “Over August and September we are going to be releasing a number of technical notifications to set out what UK citizens and businesses need to do in a no deal scenario, so making much more public awareness of the preparations.

“We imagine there are going to be around 70 of those technical notices that will be issued.”

Mrs May also strongly denied claims she had shown German Chancellor Angela Merkel her Brexit plans before presenting them to cabinet ministers.