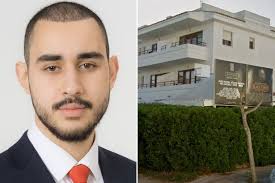 A British holidaymaker critically injured after plunging from a second-floor apartment in Ibiza last night has been identified as Labour Party councillor Tolga Aramaz.

The 23-year-old representative for Edmonton Green in London Enfield was admitted to the intensive care unit of a private hospital in San Antonio shortly after 1am this morning.

Sources at the Nuestra Señora del Rosario Clinic have described his condition as “delicate” and say he is suffering from multiple trauma injuries.

Former Kings College London student Tolga is understood to have been with friends when he fell.

He landed on a restaurant awning which cushioned his fall before ending up on the terrace of the eaterie called La Dolce Vita in the popular holiday resort of Playa d’En Bossa.

Police are investigating but say they believe the incident was an accident and there is no evidence of any foul play.

The Leader of Enfield Council, Cllr Nesil Caliskan, said this morning: “It is with great sadness that we heard of the incident concerning Cllr Tolga Aramaz.

“We hope he makes a full and rapid recovery and our thoughts are with his friends and family during this difficult time.”

Tolga, a member of Unite, was elected as Labour Party representative for the Edmonton Green ward in May with 2,629 votes.

He said afterwards: “Thank you for all that has voted for me. I am now the first elected representative in my family and that gives me great pride.

“I will serve my residents to the best of my ability and me and my comrades will aim to protect the interest of the many not the few.”

Shortly after being voted in, the Turkish speaker retweeted a photo of Turkey’s president Recep Tayyip Erdogan with a banner over his eyes saying ‘Terrorist’.

He also railed against Brexit negotiators he claimed had left Britain in a “bloody mess” by using the issue to “improve their political career instead of improving the future of this country.”

He wrote on Twitter: “Either step up or step aside and let Labour deal with it.”

Tolga announced in February he was standing as an Enfield councillor.