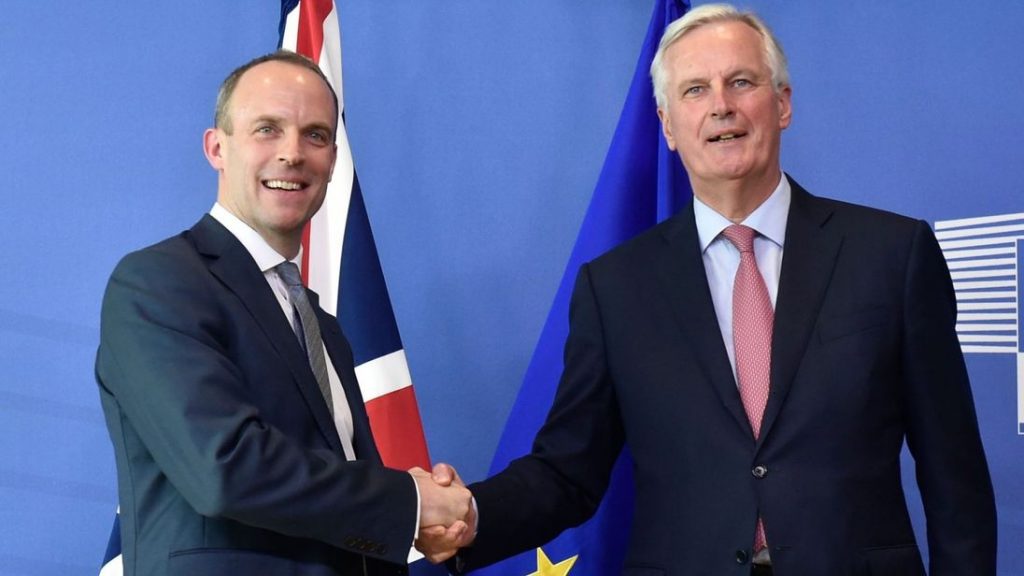 Dominic Raab makes his first visit to Brussels since taking on the role, as EU states are told to step up “no deal” preparations.

New Brexit Secretary Dominic Raab has called for “renewed energy, vigour and vim” in negotiations with the EU, as he made his first trip to Brussels since taking on the role.

Greeting EU chief negotiator Michel Barnier for the latest round of talks over the UK’s exit from the bloc, Mr Raab hailed “a lot of progress” on divorce matters.

However, he added it is “now vital” that both sides make progress on thrashing out the nature of Britain’s future relationship with the EU.

It follows the government’s publication of a much-delayed white paper setting out its detailed proposals for future UK-EU trade and security cooperation.

Despite the document having infuriated Conservative Brexiteers and prompted a round of resignations from Theresa May’s government, including former Brexit secretary David Davis, Mr Raab told Mr Barnier: “I’m looking forward to with renewed energy, vigour and vim looking at the detail of all of this.

“I’m looking forward to intensifying, heating up the negotiations and making sure we’re in the best position to get the best deal.”

Speaking alongside Mr Raab, Mr Barnier described the agreement of “an all-weather insurance policy” for avoiding a hard border on the island of Ireland, whatever the outcome of Brexit talks, as a “matter of urgency”.

He also repeated Brussels’ position that a future EU-UK trade agreement must respect the “fundamental principles that define the EU”.

Mr Raab and Mr Barnier met in Brussels after EU member states were told to step up their preparations for a possible “no deal” Brexit.

The European Commission said “everyone must now step up plans for all scenarios and take responsibility for their specific situation”, including businesses and citizens, ahead of Britain’s official exit day of 29 March 2019.

It warns of the possibility of long queues at borders and ports, disruption to air travel and new restrictions on data transfers if no exit deal is agreed between London and Brussels – something that is also sometimes referred to as a “cliff-edge” Brexit.

“Today’s text calls on member states and private parties to step up preparations and follows a request by the European Council last month to intensify preparedness at all levels and for all outcomes,” the bloc’s executive said.

“While the EU is working day and night for a deal ensuring an orderly withdrawal, the UK’s withdrawal will undoubtedly cause disruption – for example in business supply chains – whether or not there is a deal.”

It added “there is still no certainty that there will be a ratified withdrawal agreement in place on that date [30 March 2019]”.

:: A “no deal” Brexit could result in “significant delays” to transport and a “significant drawback” for trade
:: UK individuals and organisations could become ineligible for EU grants and unable to bid for EU contracts
:: Products could require new authorisations and certifications
:: Professionals may need to have their qualifications recognised by an EU member state as well as the UK

The commission insisted its advice was not “a sign of mistrust in the negotiations”.

If the talks proceed according to plan, a withdrawal agreement and a political declaration on future relations will be agreed by October.

This will allow enough time for the exit deal to be ratified by the British and European parliaments.

On the prospect of Britain exiting the EU without a deal, Prime Minister Theresa May’s spokeswoman said the progress made so far suggests “that is not where we will end up”.

The government will put out roughly 70 “technical notices” in the coming weeks, which will lay out the necessary preparations in the UK for exiting without a deal.

A top Whitehall official warned MPs on Thursday of “horrendous consequences” if no deal was accompanied by “spiteful or ignorant” behaviour on either side.

John Manzoni, chief executive of the Civil Service, said that while “not everything will be perfect”, mandarins would be “ready” for a cliff-edge Brexit.

But he then warned: “We have to prepare in the event that there are either spiteful or ignorant or whatever activities by third parties.

“That obviously makes it very uncomfortable and some horrendous consequences, and that’s what we have got to try and do our best to mitigate against.”

Fielding questions in the Commons before setting off to Brussels, Mr Raab said he was “relentlessly and unflinchingly” focused on getting a “win-win deal good for this country and good for our European friends”.

Mrs May, meanwhile, is making her first visit to the Irish border – a major sticking point in the negotiations – since the 2016 referendum vote.

The threat to Mrs May’s premiership sparked by disquiet over her Brexit blueprint appears to be subsiding as MPs prepared to head off on their summer breaks.

But in an indication of the unease that remains within her party, Conservative Philip Davies has submitted a letter of no confidence in the PM’s leadership.

Mr Davies – the third Tory to publicly declare he has submitted such a letter – said he had “lost trust” in her ability to deliver Brexit.

A total of 48 MPs – 15% of the parliamentary party – must write to the chairman of the backbench 1922 Committee to spark a leadership contest. It is not known thus far how many letters Sir Graham Brady has received.

One of Mrs May’s cabinet minister has also refused to publicly back her Chequers Brexit plan.