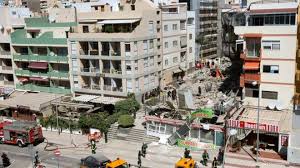 A court in the Tenerife has said that there was no criminal responsibility for the building collapse that left seven people dead in April 2016.

The ruling issued from Arona Court number 3 said the collapse of Edf Julián José in Los Cristianos was down to multiple factors, however none of those were individually criminal.

Early forensic studies of the buildings after their collapse discovered them to be in a poor condition, with poor construction techniques involved in the original erection of the building. It is yet to be announced if there is to be any civil prosecutions as a result of the ruling.