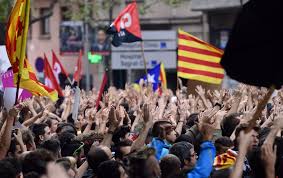 Pro-independence protesters obstructed major roads and a high-speed railway line in Catalunya this morning, one year after a banned referendum on secession that was marred by violence.
Hundreds of activists, many covering their faces with scarves, occupied high-speed railway tracks in Girona, north of Barcelona.
Central streets in Barcelona and Lleida were blocked, as was the AP-7 motorway which leads to the French border, and A2 linking Barcelona to Madrid.
The protests were called online by a grassroots group calling itself the Committees for the Defence of the Republic, founded to help stage last year’s referendum and now demanding a clean break with the Spanish state.