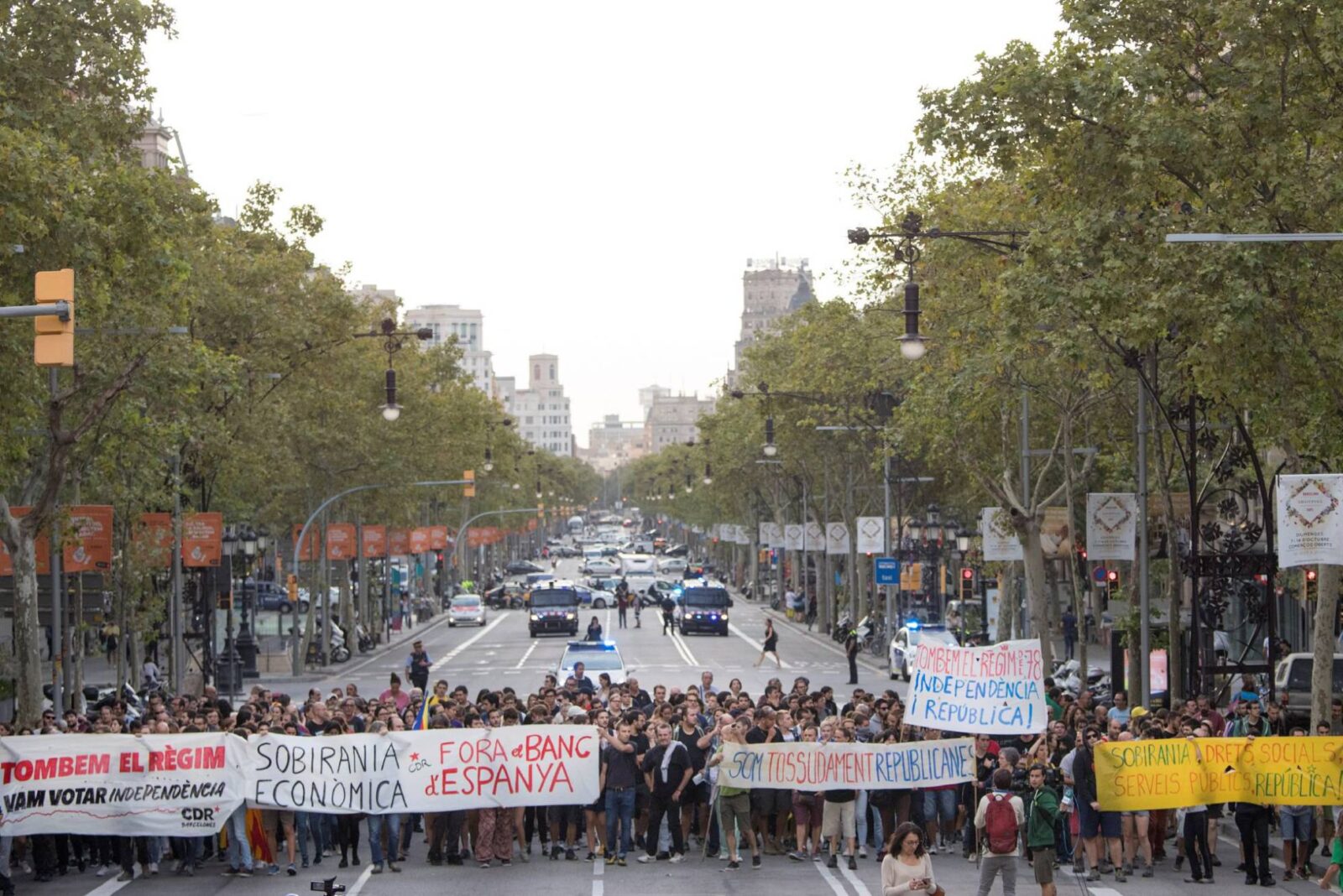 Supporters of Catalan independence on Monday cut off major roads, blocked the AVE high-speed rail link and organized street marches on the first anniversary of an unauthorised independence referendum and a police crackdown that made headlines across the world last year.

At an institutional event to observe the anniversary, Catalan premier Quim Torra publicly urged these groups to keep putting pressure on the state, drawing angry responses from unionist parties and civic groups.

Members of the self-organized activist groups known as the Committees for the Defense of the Republic (CDR) congregated on the L-11 highway where it meets the N-240 national road early Monday morning, said the Mossos d’Esquadra regional police force. The A-2 and AP-7 highways were also blocked, while at 8am around 400 people cut off the AVE high-speed train line in Girona. Activists at the train station chanted: “October 1, we don’t forgive and we don’t forget!” The premises have now been cleared, AVE spokespeople said on Monday morning.

According to local police, around 13,000 students marched through the streets of Barcelona this morning. Demonstrating for two hours or so in favor of independence, attendees waved flags and carried ballot boxes used in last year’s unofficial poll.

Meanwhile, the leaders of Catalonia’s pro-independence government gathered in Sant Julià de Ramis (Girona), the town where former premier Carles Puigdemont was going to vote in last year’s referendum, which went ahead despite being ruled illegal by Spain’s Constitutional Court. The police prevented Puigdemont from voting, and he was removed from office soon after when Madrid temporarily suspended Catalonia’s regional powers. The ousted leader fled the country to avoid being arrested and tried for rebellion, and has since been living in Belgium where he continues to campaign for Catalan independence.

The event in Sant Julià de Ramis was attended by the Catalan premier, Quim Torra, and other members of his executive. In his address, Torra told the CDR groups to “keep putting on the pressure, you are doing the right thing by putting on pressure.”

Torra, a separatist who was handpicked by Puigdemont as his successor, urged the movement to remain loyal “to the clear mandate in favor of independence,” alluding to the referendum. According to Catalan government sources – which cannot be confirmed as the vote lacked the guarantees of an agreed referendum – just over 90% of voters cast “yes” ballots while 7% voted no, with a turnout of around 45% of registered voters. International observers headed by the Dutch ambassador Daan Everts said that the referendum, such as it was held, did not meet international standards.

Reading out a statement on Monday, Torra said that “a year ago, the Spanish state repressed such a basic right as the right to self-determination and also freedom of expression.” He also demanded the release of jailed separatist leaders, the return of those living “in exile,” and for the courts to shelve the case against the secessionist attempt.

Roger Torrent, the speaker of the Catalan parliament, added that “nothing will be the same again” and urged the independence movement to stay together. The October 1 vote is the seed of the republic,” he said. Despite the call to unity, growing division was evidenced again when the CDR group in Barcelona asked for Torra’s resignation, as it did on Saturday following the clashes with the police.

“For separatist commandos to block roads, occupy public buildings and paralyze Catalonia is very serious. But for Torra to encourage them to continue is intolerable,” tweeted opposition chief Inés Arrimadas, whose liberal, anti-independence group Ciudadanos was the most-voted party at the last regional election of December 21. Although the election gave separatist parties less than 50% of the popular vote, their combined forces earned more seats thanks to a proportional representation system that rewards rural dominance over city votes. The turnout rate was a historic 81%.

“The premier has just expressed public support for the CDR, for those who are curtailing the freedom of expression of Catalans. This is an extremely serious fact that makes Mr Torra unfit to be president,” said José Rosiñol, head of the unionist civic association Societat Civil Catalana. “We demand his immediate resignation and new elections.”

Also on Monday morning, Puigdemont made a seven-minute address from Belgium calling for the unity of the independence movement and accusing the Spanish state of trying to divide them. “If we want to keep winning, it is essential not to stray from the path, to leave partisan interests to one side, and to avoid falling for the provocations of Catalonia’s adversaries,” he said.

The message comes on the heels of a confrontation between the Catalan government and the small far-left CUP party over the events this past weekend, when the regional police acted against radical activists in Barcelona who were trying to boycott a public tribute to the police who participated in the referendum crackdown. On Saturday, members of the CDR pelted the police with paint and assaulted several demonstrators, resulting in six arrests and 24 people treated for minor injuries.

The CDR have been behind other public disturbances in the past; in early April, members tampered with toll booths on several turnpikes. Spain’s High Court, the Audiencia Nacional, has investigated CDR members for acts of vandalism.