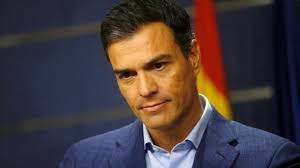 Spanish Prime Minister Pedro Sanchez has rapped Catalan leader Quim Torra for “encouraging radicals” a day after clashes erupted in Barcelona on the anniversary of the banned independence referendum.
Hundreds of pro-independence protesters knocked down barriers at the entrance of the regional parliament late yesterday evening, provoking clashes with police and forcing the regional leader of anti-secession party Ciudadanos to leave the building under escort.
In a Tweet, Sanchez said President Torra must abide by his responsibilities and not endanger political normalisation by encouraging radicals to lay siege to institutions which represent all Catalans.