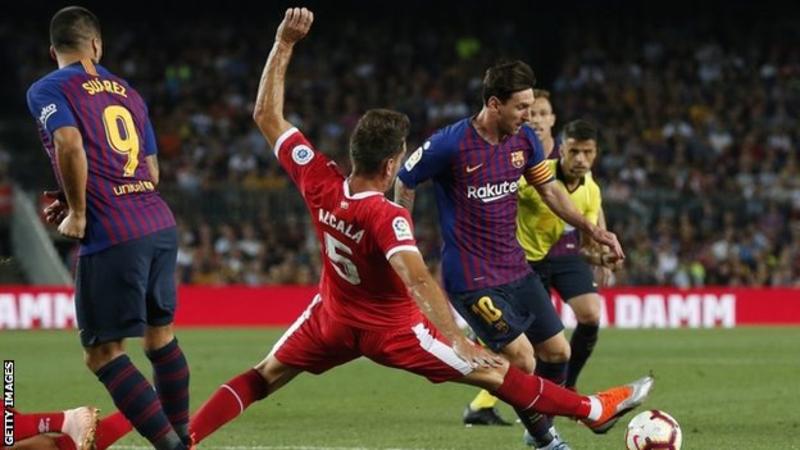 Barcelona and Girona’s proposed La Liga game in Miami is not certain to happen, says one of the men behind the idea.

Spain’s top flight agreed to play one game a year in the US as part of a 15-year deal with media company Relevent.

However, the Spanish FA and players’ union have not backed the deal.

“I don’t know if it’s going to happen because we have to get all the appropriate authorisation,” Relevent chairman Charlie Stillitano told the BBC Five Live Football Daily podcast.

Both clubs have asked the Royal Spanish Football Federation (RFEF) for permission to play the game, Girona’s home match, at Miami’s Hard Rock Stadium on 26 January at 19:45 GMT.

The American says they need the RFEF to give their approval in the next two weeks if it is going to happen – because they then need permission from world governing body Fifa, their continental body Concacaf and US Soccer.

What has to happen next?

However, on Wednesday, the Association of Spanish Footballers president David Aganzo said: “We have said it 200 million times, the players will not go to those games.” He also wants a meeting with La Liga next week.

Stillitano continued: “La Liga and its president Javier Tebas are clearly behind it. Now we’ve gone to the president of the federation – Luis Rubiales – for permission. We sent an official letter requesting it and he sent one back with questions we’re trying to answer right now.

“We were really confident, Tebas believes it’s 90% certain. I would say I’m a little more cautious because we have to go through the process. Things change very slowly in soccer. It’s not easy.

“I think we need to get this initial approval from the Royal Federation in the next couple of weeks. If their president gives us the OK, we go to Fifa, Concacaf and US Soccer. We’ve already gone to them in an informal way but we can’t do it until we get formal approval from the federation.

“We think it’s important we get this one out of the box this year and set the precedent because we think it will help soccer in America – and La Liga.”

‘We see this as like the NFL or NBA’

Stillitano, whose group founded the International Champions Cup, says “he was not surprised by the opposition”, but added his colleagues, who know less about European football, were shocked.

The National Basketball Association has had regular-season games in Japan, Mexico and eight at London’s O2 Arena. The National Football League has matches every year in London – including three at Wembley this year and has also had matches in Mexico.

And there will be two Major League Baseball games at London Stadium in 2019 – with the league also having matches in Mexico, Japan, Puerto Rico and Australia.

“Most of the ones who aren’t steeped in football were very surprised,” said Stillitano. “We see this as like the NFL or NBA, who have been doing this for years. Since 1996 the MLB have been playing regular season games in Japan and baseball is the main sport in Japan. Not only have they accepted it, but it’s helped to grow the game in Japan.

“I guess we’re surprised by the reaction of how it can somehow damage the game in the US. If we take the argument that we will hurt the league, then why would you put the Premier League or La Liga on TV in America. If people see a La Liga game and Lionel Messi, you’re not going to support your home team?

“When we hear criticism saying a home game should only be in the home country, Major League Soccer has two countries in it. The champions of the MLS are Canadian [Toronto].”

Could other European leagues play in the US?

Stillitano thinks other leagues could play their games in the US in the future but added it is “nothing to do with me”.

“The Premier League unquestionably is the biggest and best run league in the world and the most popular. There are a lot smarter people than me figuring this stuff out. [Juventus chairman] Andrea Agnelli has already come out and said he’d love to do it with Italy.

“We’ve had people from France call us. The German league has come out and said absolutely not. Some teams in Germany we deal with say that’s strange and that they weren’t asked. I’m sure everyone is looking at this as the first one.”