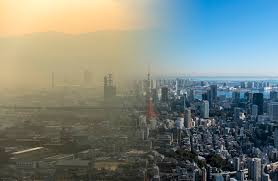 Spain’s Ministry for Ecological Transition on Thursday released air-quality data for 2017 that show a slight spike in nitrogen dioxide (NO2) and particulate matter (PM10), two of the most hazardous air pollutants for human health.

The ministry notes that this minor increase could be due to meteorological fluctuations, and not necessarily to a rise in industrial or automobile emissions.

But the report also underscores that Spain is failing to make progress in the fight against pollution, a fact that has already drawn a warning from the European Union. In January, the European Commission demanded to see Spain’s plans to revert the situation, and said that nine member states could face legal action over their failure to properly tackle air pollution.

Shortly after coming to power in early June, Prime Minister Pedro Sánchez informed Brussels about his plans to change the country’s policy on renewable energy and climate change. Several sources within the Spanish Socialist Party (PSOE) and the European Union confirmed that Spanish authorities have been in touch with the European Council, which sets the EU’s policy agenda, to discuss Spain’s new approach to environmental issues.

In Spain, the biggest problems are in the cities of Madrid and Barcelona, where traffic causes high NO2 levels. The newest figures show seven urban agglomerations where NO2 is above the annual threshold, up from six in 2016. These include the Barcelona metropolitan area, Madrid, the Corredor del Henares industrial and residential axis, the southern Madrid area, the Bajo Nervión in the Basque Country, and the city of Granada and its outlying area in Andalusia.

As for particulate matter, the number of affected areas has gone from three to five: the Granada metropolitan area, Málaga on the Costa del Sol, Villanueva del Arzobispo in Jaén province, Plana de Vic in Barcelona, and Avilés in Asturias.

Tropospheric ozone (O3) is also on the rise, the data shows. “Levels are high in suburban and rural areas,” says the report.