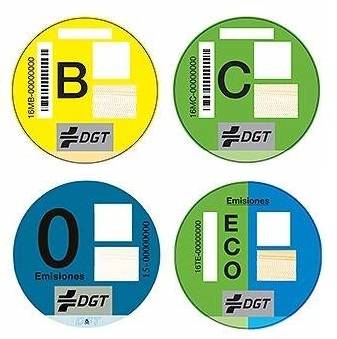 Drivers in Madrid without traffic authority emissions stickers in a prominent place will be fined in six months’ time, warns the city council.

Although residents will now have time to acquire their stickers, issued by the General Directorate of Traffic (DGT) from the post office, where this leaves visitors to the city is unclear.

Hire cars will already have them in place by the time the six months is up, but people from other parts of Spain spending the weekend in Madrid will have to be careful.

In principle, it is not thought that areas outside the central ‘almond’, or the metropolitan area within the M-30 ringroad,will be affected, meaning driving to the airport from elsewhere in Spain may not cause a problem.

Fines for not displaying the stickers will be set at €90, or reduced to €45 if paid within 20 days.

For the moment, the stickers are voluntary and it is recommended that they be fixed to the windscreen.

They come in yellow, blue, green or ‘eco’ – which is blue and green – with the blue carrying a ‘zero’ for ’emission-free’, the yellow a B and the green a C.

The inference is that petrol cars of over 19 years old and diesel cars of over 13 years will not be allowed on the city’s roads at all, since no sticker is available for them.

The vast majority of cars likely to be driven in Madrid will need ‘B’ or ‘C’ stickers.

Since they were launched free, the DGT ran out within minutes, and has now announced a €5 charge for each.

As they can only be bought from select post offices, it could be difficult for passing visitors to Madrid to acquire them.

Speed limits of 30 kilometres and ban on hoverboards on pavements

Other measures in the new Sustainable Mobility bye-law recently approved – despite votes against from right-wing opposition parties Ciudadanos and the PP – include a ban on hoverboards, or electric skateboards, on pavements and in bus lanes.

They can be used on cycle lanes and streets, subject to a speed limit of 30 kilometres per hour, but may also be restricted in tunnels and on parts of the M-30.

Helmets are strongly recommended, but not compulsory.

Single-carriageway roads and one-way streets in the city are now restricted to 30 kilometres per hour for any vehicles, including cars – a step which affects 85% of streets in Madrid.

Pedestrians can cross roads in 30-kilometre limit areas without using a zebra crossing, provided they do not obstruct the traffic or put themselves or others at risk.

Cyclists are allowed to make right turns – but not left – at red traffic lights, without having to wait for them to turn green.

Where pavements and streets are on the same level, with no kerb, speed limits are restricted to 20 kilometres per hour.

The new bye-law allows for resident-only parking spaces to be set up outside the main hub of the city and in the suburbs, especially those where parking is generally a problem, and provided residents themselves request it.

These resident-only zones will not attract a charge and there will be no time limit on how long cars can be parked there.

Taxis will be allowed to stop for up to two minutes in bus lanes for dropping off and picking up passengers only, but not for waiting for a passenger to reach them.

Pedestrian-only areas will be easier to set up with the new bye-law, and parking motorcycles, mopeds and even bicycles in these parts will be banned.

These are multi-tandem bikes with seating for up to 18 people facing beer taps, allowing them to help themselves and enjoy a drink whilst being taken round the city.

Bicycles in general, including tandem-type vehicles, rickshaws and anything similar, will not be able to carry more than five people at a time, including the main rider, without prior and express consent from the city council.