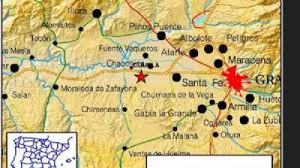 An earthquake reaching 4 on the Richter scale shook the Granada-province town of Cijuela at exactly 09.42 yesterday, sparking dozens of calls to the emergency services.

Nobody was hurt and no damage has been reported, but numerous residents in Vegas del Genil, Pinos Puente, Atarfe, Jun, Cijuela and Granada city felt the ground shake and rang 112.

According to the National Geographical Institute (IGN), which produced the above picture, the quake was 12 kilometres underground, meaning it was deep enough down not to cause any problems.