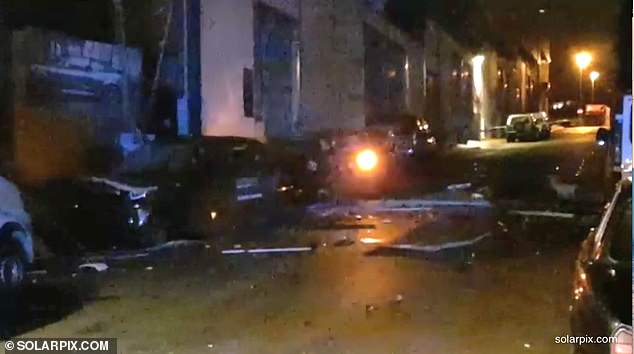 Two explosions rocked the Spanish resort of Marbella this morning as police fear a drug war is spiralling out of control.

The first blast happened outside a residential property on a gated estate in Benahavis which is popular with British expats and holidaymakers.

The second occurred outside a car wash firm on an industrial estate in nearby San Pedro de Alcantara owned by the man whose home was targeted. No-one was injured but substantial damage was caused to property.

Detectives believe both incidents are connected to ‘score settling’ between rival gangs and follow on from a kidnapping and murder in Estepona just a few days ago.
Police have already found a burnt-out luxury BMW car used in both attacks.

The first happened in the upmarket residential area of Mirador de la Alqueria, in the municipality of Benahavís, around 12:30am when the front of a villa was destroyed by the explosion, as well as a car. Bomb squad officers were called out as part of the investigation.

A few minutes later, there was a large fire, also as a result of an explosion, in the industrial estate of San Pedro, where at least five warehouses and about a dozen vehicles were affected.

The target of the attack was a car wash, in the same ownership of the villa. Doors were blown off and windows shattered in the blast.

Police are linking various recent episodes of score settling on the Costa del Sol, as well as the seizure in September of a home-made bomb which had to be deactivated in Marbella. A Dutchman was arrested yesterday in connection with planting this bomb.

Police say the suspect belonged to a Dutch criminal organisation involved in extortion and drug trafficking which used explosives and firearms to attempt against the lives of members of other rival gangs in Spain.

Spanish newspaper El Mundo says a gym near the car wash was gutted by fire last month in an attack which targeted a key drugs baron known as the ‘Maradona’ . He wasn’t hurt in the fire but was shot dead a month later in Marbella following the communion of his son.
Police are working on one theory that the owner of the villa and car wash is believed to have ‘snitched’ on the gang which incinerated the gym.

Residents of the Costa del Sol say they are living in fear because of the constant score-settling.

In previous drug-related incidents, one of the victims, a Brit aged 24, was attacked in broad daylight as he left a hair salon in the upmarket marina resort of Puerto Banús which is near Estepona.

He was taken by surprise as a man jumped out of a car and, without saying a word, stabbed him in both legs. His assailant then ran back to the vehicle and made his escape.

The Briton was taken to the Costa del Sol Hospital but refused to make an official complaint.

Police are treating the incident as a possible revenge attack and have the same theory about the earlier attack on another British man, also in Marbella.

He was stabbed and shot in both legs but also had his cheeks slit from his mouth up to his ears in a so-called Glasgow Smile before being dumped in a ditch.

He was later revealed as a 35-year-old criminal who had been jailed for his part in a robbery on a jewellery store in Nottingham in which a passer-by was killed.