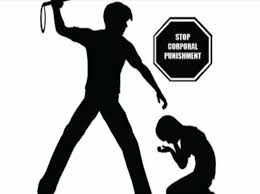 LEFT-WING party Podemos wants to ban any type of physical violence against children or teenagers, starting with the most socially-acceptable forms: smacking hands or bottoms, shaking, or similar ‘disciplinary contact’.

Spain’s third-largest political force wants the government to agree to the new law proposal in the next few months, since otherwise it may not be able to come into force until after the next general elections.

According to the text of the motion, any ‘use of physical force’ which is ‘aimed at causing a certain level of pain or at least discomfort, however mild’ should be outlawed, and would include ‘slapping, punching, smacking, kicking, shaking, scratching, pinching, biting, pulling hair or ears, hitting with a rod or other object, forcing [children] into uncomfortable positions [such as standing in a corner with their hands on their heads for a prolonged period], producing burns, etc’.

Prior to the year 2005, parents or guardians had the right, by law, to use ‘reasonable and moderate’ physical methods of discipline, but the socialist government led by José Luis Rodríguez Zapatero – in power from March 2004 until November 2011 – axed this from the Civil Code.

Zapatero was following Council of Europe recommendations which have cited scientific evidence to show smacking and other forms of physical punishment is harmful in the short and long term to children.

The current text in the Civil Code says ‘correction’ should be conducted ‘with full respect for [the child’s] physical and psychological integrity’ and ‘in accordance with his or her personality’ – meaning undue harshness should not be used with an overly sensitive child or one of a nervous disposition.

Courts have passed verdicts in this vein, finding parents guilty where corporal punishment was unnecessary, but not convicting them where it was minor and did not cause undue mental harm to the child, such as a tap on the back of the hand to stop him or her touching something.

Podemos wants to extend this, citing research and views from a number of social organisations specialising in child development, and interpreting the text in line with a ‘human rights focus’.

They also highlight the recommendation by many global charities that time should not start to run on cases of sexual abuse until the victim is 30 years old, rather than 18 as is the case at present.

The law, if it goes ahead, will include the setting up of a freephone 24-hour helpline where callers can speak to professionals who, in emergency cases, would have the jurisdiction to take immediate action, as well as a register of ‘minimum interventions’ to avoid duplication and children being ‘victimised twice’ – or having to undergo additional and unnecessary rounds of questioning and evidence-giving.

Part of this procedure would involve recording calls and statements from children so they do not have to keep remembering the same details or repeat them in front of a judge.