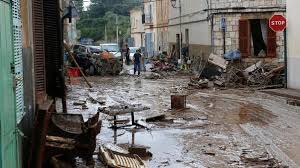 Three people – two German nationals and a five-year-old child – are still missing after Tuesday’s torrential rains and floods around Sant Llorenç in north eastern Mallorca.
Two British citizens were among 10 people confirmed dead. A military unit has been deployed in the area to search for those missing, and over 200 residents have been evacuated from their homes.
Spanish Prime Minister Pedro Sánchez visited the area yesterday and said the government “will use all its resources” to help residents recover from the flash flooding that engulfed their homes. Tomorrow’s Cabinet meeting will declare the area a disaster zone and release emergency funds.

Tennis star Rafael Nadal, who’s from the area in Mallorca hit by floods, has pledged to open up his sports centre and tennis academy to those displaced from their homes.
His academy is 13 km from Sant Llorenç in the larger town of Manacor.
Nadal also joined other volunteers in helping clear up after the flood water receeded.