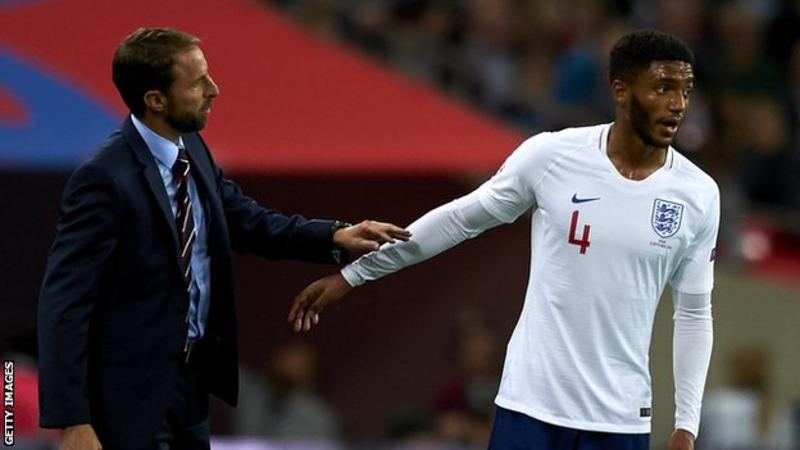 Liverpool defender Joe Gomez will start for England against Spain on Monday – after a glowing reference from Three Lions manager Gareth Southgate.

The 21-year-old will win his fifth cap in the Nations League game in Real Betis’ Estadio Benito Villamarin.

He will replace John Stones, who is suspended after his yellow card in the goalless draw with Croatia behind closed doors in Rijeka on Friday.

“Joe’s in really good form for his club,” said Southgate.

“In his matches for us, against Spain and Brazil, he has given really polished performances.

“He’s a young defender but a very good defender. He has got great athleticism and uses the ball well. I’m looking forward to seeing him in this game.

“It’s another opportunity to look at a couple of younger players. We’re slowly building a squad who are comfortable at this level.”

Spain top Group A4 in the inaugural Nations League having won their first two games, beating England 2-1 at Wembley in September.

Victory in Seville will be enough to see them win the group and book a place in the Nations League finals next June.

Harry Winks is likely to come in for Jordan Henderson, who is also suspended, while Kieran Trippier is in line to replace Kyle Walker at right-back.

Southgate is a big admirer of Tottenham midfielder Winks, who impressed on his debut in Lithuania in a World Cup qualifier a year ago before being sidelined with long-term injury.

“I think Harry can play as a deep-lying pivot or a number eight,” he said. “He’s very good at connecting the game, sees good pictures and his technique is solid.

“Harry’s less of a final-third player, but a builder of the game. He is technically a good player, composed, and has faced top opposition in Real Madrid and Barcelona in the Champions League. He has some experience of big matches.

Southgate wants England to learn the lessons of the loss to Spain at Wembley in September against a side on a high under new coach Luis Enrique, with thousands turning out in Seville to watch their final training session on Sunday.

‘We know they’re a strong team’

Spain defender Cesar Azpilicueta says his side “know what to expect” when they play England.

“We know England are a very strong team,” said the Chelsea player.

“They reached the semi-finals of the World Cup. They have been working a few years together and play in a very good way. We know what to expect and England have to win if they want to qualify for the final four in June.”

After exiting the World Cup in the last 16 against Russia, Luis Enrique’s side has scored 12 goals in three games.

They thrashed Wales 4-1 in Cardiff on Thursday, with Paco Alcacer scoring twice and further goals from Sergio Ramos and Marc Bartra.

The best of the stats