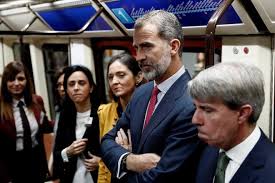 King Felipe VI caused a stir today (Wednesday) when he appeared out of the blue on the Madrid metro – a rare trip to mark the 100th anniversary of the underground train network in the capital.

Commuters missed him, as he caught the metro in the central Sol station at 11.30, but tourists, pensioners and those working non-traditional hours did their best to get on the same train, many with cameras poised.

The first carriage was reserved for the monarch, although a few members of the public who managed to sneak on board were allowed to stay, just for the novelty of seeing the King in person.

HRH Felipe travelled for 12 stops to the Chamartín terminal and then posed next to two carriages, exactly as Felipe VI’s great-grandfather, King Alfonso III, did on October 17, 1919 when the metro was first opened.

King Felipe and his wife, Queen Letizia – no stranger to strap-hanging as she was a TVE news reporter for many years before marrying the then Prince of Asturias – have travelled on the Madrid metro before, in 2005, a year after their marriage and when HRH Felipe was still Crown Prince, on an official visit to the huge expansion works to the same line, and Felipe VI did so on his own in March 2013 to see the tunnels under construction on Line 9 to Mirasierra.

But today was his first metro ride as King and, when he swiped his card at the barriers, joked about how he was not exactly an old hand at underground trains.

For security reasons, a King would not travel on the metro out of habit, so the trip was an adventure for Felipe VI as well as an unusual sight for passengers.

Once in Chamartín, Madrid’s regional president Ángel Garrido took the monarch on a tour of a classic train carriage exhibition.