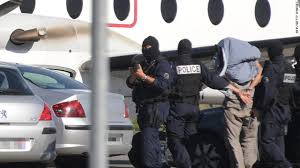 Spain has made its first ETA arrest based on a trove of documents recently released by France, the interior ministry and a source close to the inquiry said Tuesday.

The suspect was arrested in Hernani, in the northern Basque region, over messages allegedly sent to ETA in 2002 — while he was serving a prison sentence — detailing “information on potential targets” of attack, according to an interior ministry statement.

One of these messages “sent through a secure communication channel” with the ETA leadership, as well as other information, “was found within the documentation that was recently released by France to the Spanish authorities”, the ministry added.

In a symbolic act in early October, the French government handed over 8,000 ETA documents seized in France that could help solve more than 350 unsolved crimes.

A source close to the investigation said: “It is the first person arrested since the release of the documents.”

ETA, which announced its full dissolution in early May, waged more than four decades of killings and kidnappings in its fight for an independent Basque homeland in northern Spain and southwest France, leaving at least 829 dead.

Some 62 deaths are also attributed to para-police anti-ETA death squads or far-right groups.