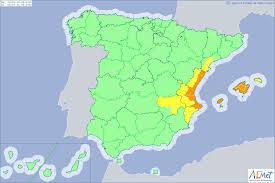 Practically the whole of Spain is on the qui vive after warnings from the Met office of the most severe storms in a decade hitting the mainland.

After catching the tail end of Hurricane Leslie – which had reduced to an ‘ordinary’ gale-force wind by the time it struck Portugal, Galicia and western Andalucía earlier this week – the country is now braced for a monsoon on a scale not seen since 2008.

Except on the Mediterranean coast, says Rubén del Campo from the State meteorological agency, AEMET.

“Episodes of seasonal torrential rain in the Mediterranean arc are common in our climate, but this is the first time since 2008 that they have been so generalised,” he explains.

Two cold fronts gripping the country – one from the Mediterranean and one from the Atlantic – guarantee that barely a single province will escape the weekend’s downpours.

In the eastern coastal provinces, this type of deluge is a regular feature of autumn and is known as a gota fría, typically involving rainfall exceeding 40 litres per square metre (four centimetres, or just under two inches) in an hour, which is the usual benchmark for insurance companies when considering weather-related property claims.

But central Spain is much drier, albeit with much colder winters: on the Med, heating is only truly essential for a month or two a year, compared with four or five months in Madrid and surrounding areas.

By Friday, the downpours will be mostly restricted to the centre and east of the mainland and the Balearic Islands, and only the Mediterranean will be affected over Saturday and Sunday – although Saturday is expected to be the worst of all for this area.

Weather warnings ranging from yellow to red have been issued, and residents in orange and red zones have been urged to avoid driving or any outdoor activity except where absolutely essential.