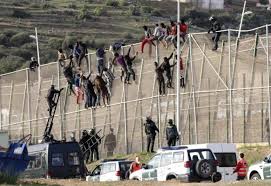 A migrant has died and 19 others were hurt after around 200 people scaled a fence to enter Spain’s Melilla enclave from northern Morocco yesterday.
Spanish police say the man was among a group who climbed over two barbed wire fences, and appeared to have died of a heart attack.
They say another 100 migrants from the sub-Saharan region had failed in the attempt to enter Melilla.
In June, the new government of Pedro Sanchez said it intended to remove the barbed wire but has so far not done so.