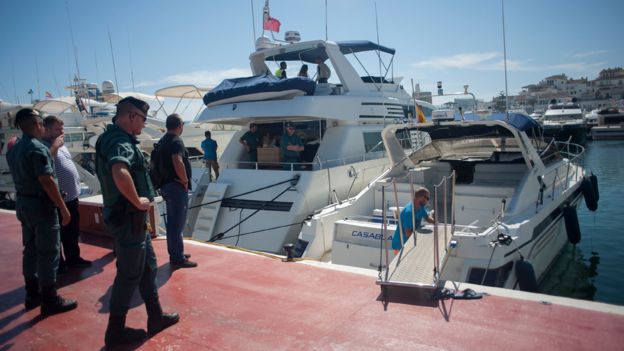 Spanish judges have acquitted 17 Russians over alleged large-scale money-laundering for the Russian mafia.

A Russian MP, Vladislav Reznik, was among those acquitted. Nine other suspects remain at large, including alleged gang boss Gennady Petrov.

The National Criminal Court found insufficient proof that the Russians’ investments in Spain involved the proceeds of organised crime.

The case focused on the so-called Tambovskaya-Malyshevskaya gang.

Prosecutors had accused the gang, based in St Petersburg, of channelling cash from offshore bank accounts into Spanish property and businesses.

They alleged the gang’s money-laundering started in the 1990s, when rich Russians began buying luxury villas in the Costa del Sol and Balearic Islands.

Mr Reznik, who previously chaired the Russian parliament’s financial markets committee, and his wife Diana Gindin were among those accused of involvement in money-laundering – charges they denied.

In February, the MP for the United Russia party, which is loyal to President Vladimir Putin, told the court he was a friend of Ilya Traber, one of the alleged gang leaders, Spain’s El Mundo daily reported.

The court ruling said the data concerning offshore accounts “is insufficient to determine any illicit origin for the money”, even though the defendants’ business activities in Spain looked “strange, uneconomic or unconventional”.

The lead prosecutor José Grinda was reportedly threatened due to his involvement in the case.

Former Russian intelligence agent Alexander Litvinenko, murdered in London with radioactive polonium-210 in 2006, had been helping Spanish officials to investigate Russian organised crime. His activities in Spain emerged in the official British inquiry into his death.