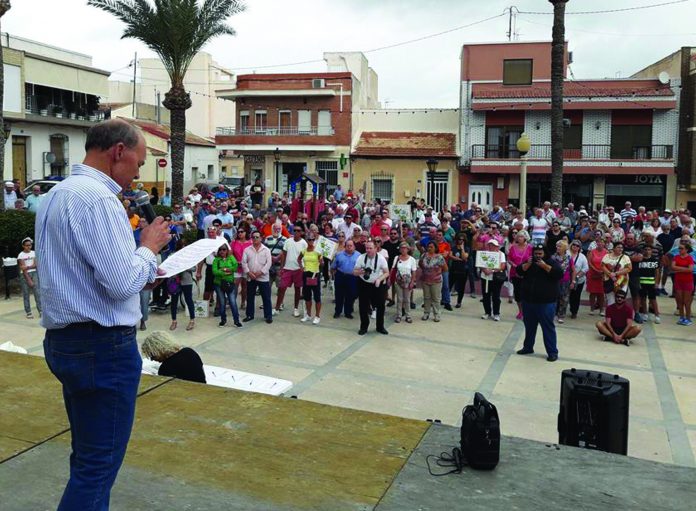 The Department of the Environment in Valencia has issued a report rejecting the request by the company “Rio de Aguas SL” to carry out geological research for the establishment of a gypsum mine in San Miguel de Salinas. The decision is based on legal and environmental arguments and speaks of “irreparable and irreversible” impacts in a protected environment.

The company had applied for permission to carry out a geological survey across and area of 1,450 hectares on the northwest face of the municipality with a research budget of 490,000 euros but opponents to the scheme had argued that the site chosen overlaps onto an area for the Special Protection of Birds (ZEPA) of the Sierra de Escalona and Dehesa de Campoamor as well as a site of Community Importance (SCI).

The report issue by the Valencian authority admits that the investigation and survey proposed by the Torralba Group, which would take place over three years, would not significantly affect the natural environment, but the subsequent exploitation, on which the request and the survey are focused, most certainly would.

The area in question, predominantly in San Miguel, but partly in Orihuela, affects an area where there is an abundance of wild fauna, birds of prey, an agricultural and forestry habitat, and the proposed investigation would cause irreparable damage. The noise caused by the future exploitation, the transit of heavy vehicles and the destruction of the habitat, makes the project incompatible with the protection of the natural values required to ensure the continued existence of the protected natural area.

The report is signed by the conservative director of the Natural Parks of the South of Alicante, José Martínez García and the head of the Natural Spaces Management Service, José Antonio Hernández.

The Department of the Environment would certainly have been influenced by the demonstration held in San Miguel de Salinas last weekend where more than 800 people marched against the proposal to establish a Gypsum Mine in the municipality.

Organised by the Neighborhood Coordinator of San Miguel de Salinas, with the support of the San Miguel Arcángel Neighborhood Association, almost 15% of the population turned out to demand that the Valencian Generalitat turn down a request to grant research permits to the company on the Sierra de Escalona and Dehesa de Campoamor.

The protest, with the exception of the mayor who sent his apologies, was joined by all of the municipal councillors with the unusual sight of delegates from the PP, PSOE, IU and UPyD walking along hand in hand.

The spokesman for the residents, Manolo Gómez, said that he was absolutely delighted with the outcome which, in addition to the tourism impact, would affect the value local property as well as having a devastating effect on the natural heritage.

The Councillor for the Environment, Miguel Ángel Fernández, added that the company’s proposals were full of holes and that even the proposed survey would cause untold environmental damage in the Sierra Escalona natural park and in Dehesa de Campoamor which hosts up to thirteen different species of birds of prey.

He said that it is the municipality’s obligation to make sure that they are protected.