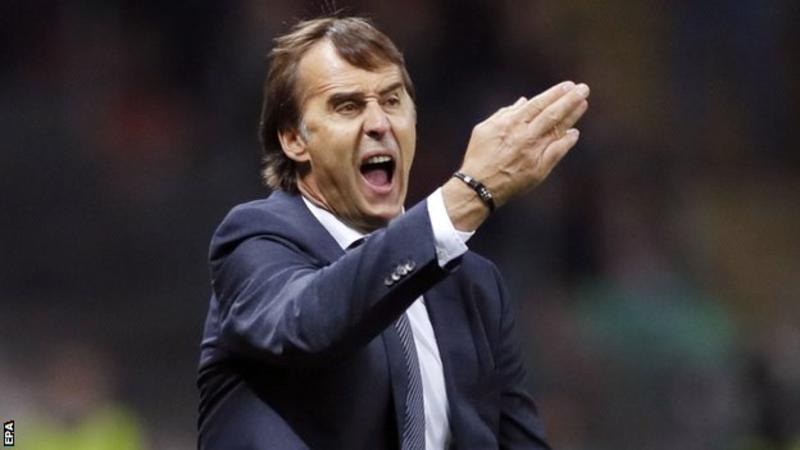 Real Madrid coach Julen Lopetegui says he is going to “fight” to turn around the club’s faltering form but could not say whether he would still be in a job for the trip to Barcelona on Sunday.

Lopetegui is under pressure following Real’s run of four defeats in five games.

“Results haven’t been great but we are going to turn this around,” he said.

Real face Czech side Viktoria Plzen in the Champions League on Tuesday before the weekend’s El Clasico.

“What I’ve learned about this club is to fight, that is the DNA of this club,” Lopetegui said.

“That’s what we’re going to do, fight, both the players and the coaching staff.”

Is Lopetegui blaming his players?

Lopetegui took over the Bernabeu club after leaving his job in charge of Spain on the eve of the 2018 World Cup.

His side’s poor run in their last five outings has included a Champions League group game defeat by CSKA Moscow.

They also lost to Levante last time out in a league defeat that left them seventh in La Liga and four points behind rivals Barcelona.

Asked if he knew that he would be in the dug-out when Madrid visit Camp Nou this weekend, Lopetegui said: “I’m here now, that’s all I can say. I am the coach at this moment.

“If you ask me what is going to happen in a month or a year, I can’t tell you. We’re focused on the present.”

He added: “The players are strong.

“They are champions not by coincidence, but because they are strong.

“They have had bad times and bad moments but they have a lot of strength. They don’t get to be champions by believing everything they hear.”