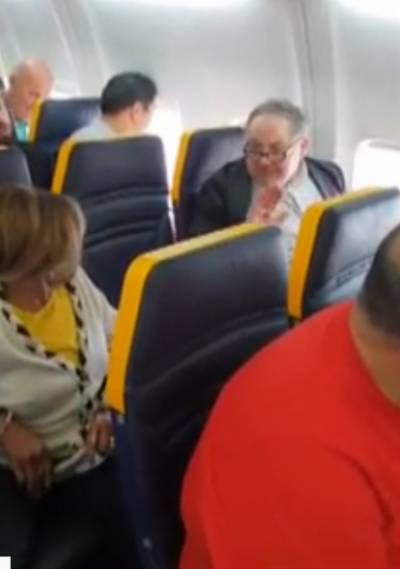 BARCELONA city council intends to take legal action after an aggressive, racist tirade by a passenger on a flight to London Stansted left the victim ‘shocked and depressed’.

The as-yet unnamed offender became impatient when Delsie Gayle, 77 (pictured left), took some time to move from her aisle seat to allow the other passenger (pictured right), who is also British, to get to his window seat on Ryanair flight FR015 last week.

As he shouted at her, Delsie’s daughter, 53, tried to explain that her mother is disabled because of arthritis, but the accused is heard shouting: “I don’t care whether she’s [expletive] disabled or not – if I tell her to get out, she gets out.”

Fellow passenger David Lawrence filmed the assault, and in his footage, the angry British man is heard calling Delsie a ‘stupid ugly black cow’ and, when she tried to explain about her arthritis – in her native English – the Brit ordered her not to ‘talk to him in a foreign language’.

Ms Gayle says she cannot stop thinking about the abuse she suffered purely for being black – and disabled.

In an interview with ITV News, Delsie said: “I feel very low.

“He paid a fare to go on holiday, I’ve paid mine, so why does he abuse me for that due to the colour of my skin?

David Lawrence was criticised by other passengers for being ‘childish’ in filming the incident rather than intervening, but defended his decision to do so.

As the descendant of the Windrush generation, Lawrence said that the ‘West Indian community’ had suffered similar incidents in the UK ‘for many years’, but had ‘never been able to share it with the public or with the world’.

“I decided that I had the opportunity to film this, as difficult as it was, and I did it because of the power of social media today and the importance of the public knowing that these incidents take place,” Mr Lawrence explained in an interview with BBC Radio 4.

Ryanair has been heavily criticised for relocating Delsie in another seat in the plane after her assailant said he did not want to sit next to ‘that stupid black ugly cow’, and for allowing him to remain in his place.

Fellow travellers say he should have been ejected from the plane and handed over to Spanish police, especially as authorities in Spain treat such attacks very seriously.

Although Ryanair has reported the issue to the police at London Stansted, as the aircraft belongs to an Irish company and was on Spanish soil, UK law does not apply and their hands will be tied.

On that basis, Barcelona city council has said it is not willing to let the abusive passenger get away with his attack, and plans to present the case to the State prosecution.

Such behaviour in Spain is considered a ‘hate crime’ and would automatically carry a stiff fine and at least a suspended prison sentence, as national law does not tolerate racist insults.

Barcelona has asked the prosecution to identify the offending passenger and source possible witnesses.

“We at Barcelona city hall will report it and search for the author of the video and witnesses,” says Asens.