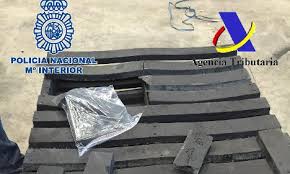 Spain’s National Police force has seized a tugboat found to be transporting 1,400 kilos of cocaine while sailing in waters near the Canary Islands.

The vessel stowing the illegal contraband is named ‘The Breath’ and reportedly departed from Turkey and carried a Moldovan flag.

The boat arrived at the Naval Base of Las Palmas de Gran Canaria this morning at 11am escorted by the Spanish vessel ‘Armada Rayo’.

A National Police unit of Udyco reportedly made 10 arrests after boarding the tug boat.

Seven Turks, one Georgian, one Ukrainian and one Bulgarian were arrested according to Spanish media.

Commissioner Santos Bernal of the National Police declared almost 15,000 kilos of cocaine have been seized in 2018 on the high seas.

Police report that officers confiscated 41 containers of cocaine weighing more than 30 kilos each.