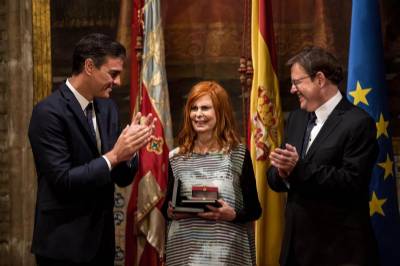 ONE-TIME socialist leader for Valencia and committed feminist Carmen Alborch has died at home aged 70 after a long illness, the PSOE party has announced.

Central government minister for culture from 1993 to 1996 and MP for three terms of office, Carmen ran for mayoress of Valencia in 2007, although the late Rita Barberá’s reign would not end until May 2011 when the PP lost the elections for the first time in 24 years.

A city councillor who had a spell as manager of Valencia Modern Art Institute, the IVAM museum, Carmen’s last appearance in public was on ‘Valencia Day’, the bank holiday for October 9, where people or organisations who have made a significant contribution to the community receive awards.

She was granted the High Distinction of the Generalitat Valenciana, or regional government, and announced in her acceptance speech that she believed feminism should be declared as UNESCO heritage.

Sra Alborch’s battle for equality between men and women led to her being awarded the Progressive Women Prize, the Andalucía regional government Meridian Prize, the Rosa Manzano Award in 2007 and the Gabriela Sánchez Award in 2009.

She was honorary director of the Classic and Modern Association and also of the Women in Technology Research Association, and won the Generating Art Prize in 2015, awarded by the women’s arts association Generando Arte.

Socialist MP Adriana Lastra, 39, who is deputy secretary-general of the party at national government level, tweeted: “A simply GREAT woman has left us, a committed feminist, a born socialist. Farewell, Carmen Alborch. Thank you for showing us the way.”