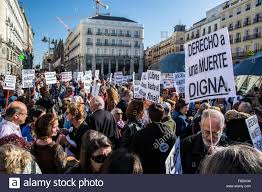 A PP amendment to the PSOE proposal for the legalisation of euthanasia has failed to pass after it was debated in the Congress of Deputies.

The controversial act is being debated in parliament, which will allow those who have a serious and incurable disease to end their lives at a time of their own choice.

Upon the presentation of the amendment by the conservative PP, they were accused of filibustering in an effort to prevent a vote on the final legal text.