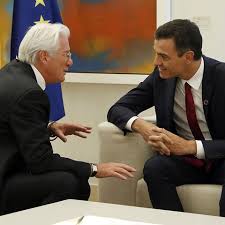 HOLLYWOOD legend Richard Gere has met with Spain’s president Pedro Sánchez to convince him to make homelessness a priority and promote ways of eradicating poverty.

During the session in the Moncloa Palace, the presidential residence, Pretty Woman star Gere was joined by his wife, Spanish businesswoman Alejandra Silva, 35, who is pregnant with the couple’s first child together as well as the patron of the Rais Foundation, and the Foundation’s chairman Fernando Vidal.

Gere’s and Galicia-born Silva’s profiles have been high in Spain of late, as they are trying hard to raise awareness of the plight of street-dwellers and the need for social and employment opportunities to be provided to them to help them out of their ordeal.

Sánchez pledged to take measures to offer hope for the homeless and to toughen up sentences for hate crime affecting the poor.

Aporophobia, which translates literally as a ‘fear’ or ‘phobia’ of people in serious poverty, is a term more usually applied to hatred and aggression towards the poorest members of society, in the same way as homophobia and xenophobia mean ‘hate’ rather than ‘terror’ of homosexuals and foreigners.

In the case of an assault or serious verbal attack on a homeless person, Spain’s Penal Code will be enhanced to make aporophobia an aggravating factor in sentencing, so that ‘those who commit such cruel and inhumane acts’ can ‘feel the moral reproach of society’.

Whilst attending last December’s Madrid première of his film Norman: The moderate rise and tragic fall of a New York fixer – about a street dweller which Gere directs and plays the lead role in – the actor gave a speech in which he praised the city’s mayoress, left-wing ex-judge Manuela Carmena, for her anti-poverty policies.

These include banning home repossessions in the whole of Madrid, arranging Christmas parties with gourmet meals and entertainment for rough-sleepers, and redesigning the city’s notorious ‘anti-homeless’ benches, by removing the arm-rests in the middle that prevented them being used for sleeping on.

Three years before the Norman première, Gere had directed a short film, Time out of mind, about a homeless man named George, whom he also played.