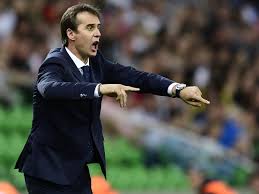 Julen Lopetegui’s brief and inglorious reign as Real Madrid coach lasted just 139 days after the club confirmed yesterday that he’d been sacked.
Lopetegui was dismissed following a meeting of the board of directors, who concluded there had been a “great disproportion between the quality of the staff of Real Madrid…and the results obtained to date”.
Santiago Solari, the club’s B team coach, has been put in temporary charge and is now expected to lead Real for their Copa del Rey game against minnows Melilla tomorrow.
The Argentinian could also remain in post for Saturday’s La Liga match at home to Valladolid.