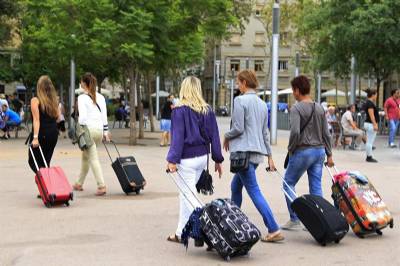 8.9 million foreign tourists came to Spain in September, 0.5% more than in the same month last year, reversing the slight downward trend seen in July and August. Slightly fewer tourists came from the traditionally strongest markets – the UK and Germany – but there were substantial increases in visitors from France, Italy, Portugal and Russia.

For the first nine months of 2018 tourist figures have remained stable in year-on-year terms with a total of 66.2 million visitors according to the latest figures from the National Institute of Statistics (INE).

So far for 2018, tourist figures dipped slightly in April compared with the year before (because Easter was in March in 2017). There were also small dips in January (0.2%), July (4.9%) and August (1.9%) – the latter two probably due to the exceptionally fine summer weather experienced in northern Europe this year.

The September figures show a 3.1% drop in the number of UK and German visitors coming to Spain hasta (2.1 and 1.4 million visitors respectively).

In September alone, the favourite Spanish destination for foreign tourists was the Balearic Islands, with 22.8% of the total (2.03 million) and up by 1.1% on last year; followed by Catalonia, with an increase of 0.3% (2 million).

Between January and September, the regions with the highest number of tourists were Catalonia, with over 15.4 million; the Balearic Islands, with over 12.2 million; and the Canary Islands with 10 million.

Most tourists (53.6 million) came into Spain via its airports.

The number of foreign toursist coming into the country by road increased by 6.2% in September increased (1.23 million).

Between January and September, leisure and holidays were the reasons 58 million tourists travelled to Spain (0.3% more than last year), whereas business travel went up by 6.5% (3.7 million trips).