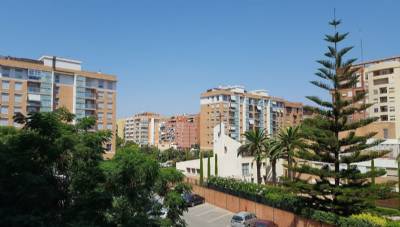 Three cities in Spain are home to the top ‘trending’ neighbourhoods chosen by European tourists this autumn and winter – and, perhaps surprisingly, Madrid and Barcelona are not among them.

Always favourites for European city breaks, Spain’s capital and its second largest city respectively win the most tourists beyond the country’s coasts, and are highly-appreciated for their beautiful architecture, cleanliness, and the fact they are among the safest major metropolitan areas in Europe, if not the world.

But five districts in Valencia, Sevilla and Granada are where European travellers most enjoyed their trips to Spain, according to research by Airbnb.

Top of the list comes Valencia’s L’Olivereta (first picture), or ‘district 7’, which borders on the Campanar neighbourhood and the satellite town of Mislata to the north, the suburb of Patraix to the south, and is sandwiched between the Extramurs district and the town of Xirivella to the east and west respectively.

One of Valencia’s most densely-populated districts, it is among the cheapest to buy property and Airbnb accommodation starts at €12 a night, never exceeding €50, and is relatively close to the centre – walkable, and just minutes on the metro.

It is home to the 11-acre Parque del Oeste (‘West Park’) – a fabulous family recreation spot with skating rinks, mini-golf, bowling green and concert stadium and an abundance of trees, as well as its famous plane statue to commemorate the fact it was built on the site of the old air force barracks.

Number four for European tourists is Valencia’s ‘district 9’, or Jesús neighbourhood, south of the Extramurs area, east of Patraix and fairly close to the City of Arts and Sciences, well-known for its tree-lined La Rambleta park and quaint side-streets.

Top city districts in Spain for Spanish travellers, as opposed to those from elswhere in Europe, also include Valencia’s Camins al Grau neighbourhood near the port in third place.

If you’re in Valencia

Despite being Spain’s third-largest city, Valencia is easy to get around on foot as its central hub is very compact: visit the ceramics museum in the exotic, ‘tie-dye print’ Marquis of Dos Aguas’ palace, the two covered markets – the Mercado de Colón and the Mercado Central, the Lonja or old exchange mart building, and the splendid cathedral where you can climb to the top of the Micalet bell-tower for an unrivalled view over the metropolitan area.

If you’re into painting and sculpture, a trip to the house of the Benlliure family, or to the spectacular MUVIMand IVAM modern art museums are a must.

A short bus ride to the futuristic City of Arts and Sciences (second picture) will leave you wondering why it’s not world-famous: the ornate architecture of the Prince Felipe Science Museum, the Oceanogràfic aquarium with species from every sea in the world, the Hemisfèric, where you can watch fascinating documentaries, the Palau de les Arts Reina Sofía concert hall, the Ágora sports stadium and the Umbracle covered gardens have all been compared very favourably with the Sydney Opera House. 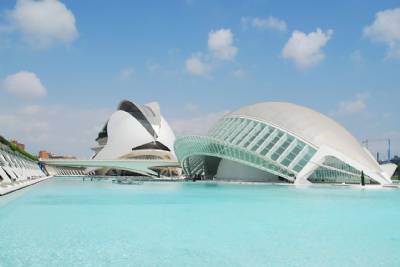 And Valencia is a charming city just to hang out and do nothing – pedestrianised side streets filled with pavement cafés, beautiful classical architecture on ordinary buildings, fountains, plazas, the giant bull-ring next to València Nord station and, in fact, even the station itself with its delightful pattern of ceramic oranges are attractions in themselves, as is the immense sandy beach with its rooftop cocktain bars.Try any one of the region’s 300-plus paella recipes and, to satisfy your sweet tooth, a cold glass of horchata (tigernut juice with sugar, which tastes like a kind of coconut-y, almond-y milkshake) with fartons (iced sponge fingers) dipped in.

Voted second by Airbnb respondents was the San Pablo district in Sevilla, home to the largest sports centre in the city and birthplace of former Real Madrid player Rafael Gordillo Vázquez, just off the main Avenida de Kansas City highway between the station and the centre. The fact it is a purpose-built suburb designed as a 1960s’ council estate does not do this attractive, quiet enclave justice: it’s very white, with terracotta trimmings, and refreshingly un-touristy, but walkable to all the top attractions in Sevilla – or a very short bus ride away. 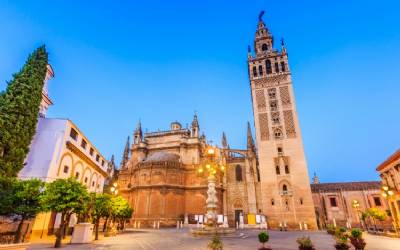 The Santa Justa neighbourhood, adjoining San Pablo, is third from top, and is right where the main long-distance rail station is based, meaning it’s easy access from the nearest airport and for fast trains to anywhere else in the country.

San Pablo and Santa Justa combined, despite their extremely humble origins, are now the wealthiest districts in this most stereotypically Spanish of Spain’s cities.

For Spanish travellers, rather than other Europeans, the top two city districts in Spain were also in Sevilla – the Nervión and Triana neighbourhoods, the latter being separated from the main hub of the city by the river Guadalquivir, with a buzzing nightlife, a ceramics museum, the well-loved Cartuja monastery, and the birthplace of some of Spain’s best-known performing artists including pop icon Manuel Carrasco and flamenco diva Isabel Pantoja.

If you’re in Sevilla

Every fun, fabulous and colourful cliché about Spain that has nothing to do with the vast majority of the country can be found in this sun-drenched city – except the beaches, of course. The nearest of these is in El Puerto de Santa María (Cádiz province), which is a short train ride away. As for the rest – fiestas bring the obligatory polka-dot dresses, castañets, gypsy guitars, flamenco and sevillanas dancers, and Andalucían horses (correctly known as Spanish thoroughbreds, or Pura Raza Española) decorated in flower garlands. You can find these at any patron saint fiesta or during the flamboyant Feria de Abril, or April Fair.

Sightseeing is certainly not lacking in Spain’s fifth-largest city: the Royal Arab fortress, or Real Alcázar, with its Mediaeval Islamic architecture is an historical gem where you can transport yourself back to the days when the Moors, or north African Muslims, were the dominant ethnic in Spain for seven centuries.

Sevilla cathedral (third picture) is the third-largest in the world, the largest in Spain and one of its most splendid, and you can climb the Giralda Tower for panoramic views. Take in the huge and elaborate Plaza de España (fourth picture) with its mosaïcs of every region in the country, and the ‘Golden Tower’ or Torre del Oro, once joined onto the old city wall and used by the Arabs as a place of worship and then a prison, although now houses Sevilla’s Naval Museum. 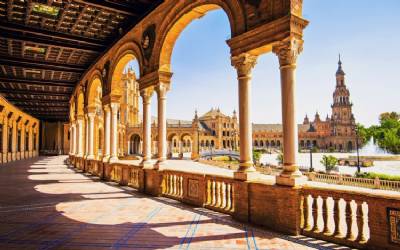 The huge Metropol Parasol, 26 metres high and known locally as ‘the Sevilla mushrooms’, is an intriguing piece of modern architecture with incredible panoramas from its viewing point at the top, and a permanent market and the Antiquarium museum – the most iconic Roman archaeological site in the province – on the ground floor.

Andalucían cuisine combines some of the best of Spain’s stereotypes, with tapas in abundance and a vast array of fried and grilled fish and seafood.

Granada’s San Ildefonso neighbourhood is set to be one of Spain’s most trendy this autumn and winter, and is an ideal base for the south-eastern city’s top sights: it is right in the centre and close to the quaint Albaicín neighbourhood, making it well-placed for Alhambra Palace buses and walking distance to the cathedral and souks.

If you’re in Granada

In winter, you’re a short drive from the Sierra Nevada where you can spend the day skiing and be back in the city before nightfall for some last-minute shopping. Of course, other than skiing, the main purpose of most tourists’ pilgrimages to Granada is the majestic, intricate and dazzling Alhambra Palace – book online and print your ticket to beat the queues, but set aside a whole day to drink in the splendour of this unique walled complex.

Originally called Qa’lat al-Hamra, or ‘red castle’ because of the colour of its stone walls, the palace is believed to have been founded in the year 889 during the civil conflict in the Caliphate of Córdoba, and gradually extended and adapted over the next 400 years, becoming a military fortress that dominated the entire city in the 10th century and eventually, a Royal residence when the first of the Nazarí monarchs, Mohammed ben Al-Hamar moved in. Its ornate architecture based upon tall, thin columns and narrow arches, and its painstakingly-carved artistic detail, plus the Generalife gardens in the centre, make the Alhambra Spain’s most-visited and number one favourite visitor attraction.

But Granada is not just about the Alhambra: the cathedral is worth the detour, as is the summer residence of one of Spain’s most-acclaimed literary icons, poet and playwright Federico García Lorca, and it is easy to lose an entire day exploring the winding, cobbled streets with their Arab-style souks in place of mainstream shops, stocking up on delightful, colourful arts and crafts, jewellery, handmade clothing, scarves and home décor items. You’ll feel as though you’ve journeyed into the heart of Morocco – and certainly as though nothing has changed since Granada was the seat of Arab royalty.