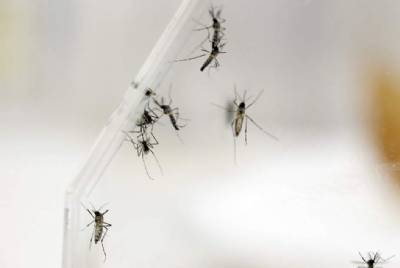 Scientists in Spain have created a vaccine against the Zika virus, a tropical disease caused by the Aedes Aegypti mosquito (pictured).

In testing it on rats already infected with Zika, they found the animals made a complete recovery and that their immune system responded to the drug developed in the laboratory staffed by members of the High Council for Scientific Research (CSIC).

Zika, a virus declared an international public health emergency by the World Health Organisation (WHO) in 2016, can cause severe neurological disorders such as Guillain-Barré Syndrome, and microcephalia – a very small, under-developed brain – in babies where a pregnant woman is affected.

As yet, there is no licenced vaccine against the condition and the only way to prevent it in at-risk areas is by using very strong insect repellent with DEET as one of the ingredients.

According to Juan García-Arriaza and Mariano Esteban of the CSIC, the new MVA-ZIKV vaccine was developed along the lines used by those who have created innoculations against Ebola, HIV and AIDS, and Hepatitis C.

Two types of the Zika virus were introduced into a substance known as a ‘pox-viral vector’, a genetically-weakened virus, which led to the generation of the ‘precursory protein’ of the Zika membrane and of its outer skin, respectively.

These two proteins are the ‘most immunogenic’ of the Zika virus, García-Arriaza explains.

They are capable of producing viral particles similar in type and size to those of the Zika virus, creating an immunity to the latter.

Just one dose of the Zika vaccine is able to control infection by the virus in rats and mice, says Dr Martín-Acebes, one of the key members of the research team.

Dr Patricia Pérez, main author of the research report, says future studies will aim to determine which components of the immune system are linked to protection against the virus, and how to prevent transmission from mother to unborn baby.

The results obtained open the door to trials on non-human primates and, if these are successful, would justify starting clinical trials.

CSIC researchers would need funding for these two phases, which they are hoping to obtain now that results of their work have been published in the magazine Scientific Reports.