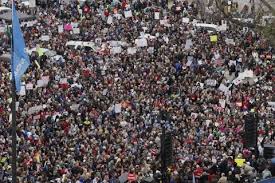 Barcelona police say that 8,000 have joined a downtown march all the way to the regional parliament in the city. Thursday’s strike paralyzed many public services in the northeastern Spanish region, leaving some schools and universities empty.

Workers and student unions say that austerity measures implemented at the height of the 2008 financial crisis haven’t been reverted despite five years of continued economic growth. Catalan authorities blame the cuts on a lack of funding from central authorities.

A similar protest on Wednesday by fire and health workers – the latter on their fourth day of consecutive strike – ended in clashes with anti-riot police.