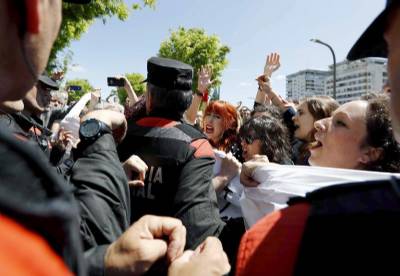 Protests have broken out across Spain in response to a regional High Court of Justice’s having confirmed a nine-year sentence for ‘sexual abuse’ of an 18-year-old woman and acquitted the five offenders of ‘rape’.

The victim, from Madrid, was very drunk when the men – between 10 and 20 years her senior – known as La Manada (‘The Herd’) offered to walk her home following the day’s bull-running at the Sanfermines fiesta in Pamplona, Navarra in summer 2016.

She was too intoxicated to put up any real resistance, to either actively refuse or consent, or to feel real physical pain, meaning the judges at the initial trial considered she had not been raped at all.

La Manada, whose members come from Sevilla, filmed themselves taking it in turns to rape her in a doorway, and one judge even said the footage – described as ‘harrowing’ by investigating officers – showed ‘everyone’ having a ‘rollicking good time’.

Women judges’ association THIEM hotly criticised the verdict, and women’s crisis centres in Spain pointed out that the response of ‘freezing’ in the event of a sexual attack was very common.

They also explained that rape victims do sometimes produce an ‘involuntary sexual response’, which is the body’s way of shielding them from physical damage.

Now, the most senior court in the region of Navarra has held that ‘The Herd’ should go to prison for nine years, for ‘sexual abuse’, rather than for up to 20 years, as would be the case if the verdict was one of gang rape.

Both parties intend to appeal – the victim has been persuaded to keep up her fight by her lawyer, who says hers is an important test case, and the five attackers are pushing for a total acquittal, insisting they had consenting relations with her.

The next step would be the National Court, then the Supreme Court, the highest contentious audience in Spain, after which any appeals would have to be directed to Europe.

But two judges in the Navarra court trial dissented, and called for a 14-year, three-month sentence for each member of La Manada on the grounds of ‘sexual assault’, which covers rape.

Magistrates Joaquín Galve and Miguel Ángel Abárzuza insist the culprits ‘led the victim into a trap’.

They say the before, during and after did not show ‘merely an abuse of superiority’, based upon their age in relation to the victim’s and their number allowing them to ‘take advantage’ of the young woman; rather, an act of ‘intimidation and coercion’ created by the five men.

They ‘led her into a trap’, Abárzuza and Galve say, because they ‘lured’ her into a place where she had ‘practically no chances of fleeing or attempting to escape’, which ‘clearly shows the existence of sufficient intimidation’ to enable them to act ‘against the victim’s will’.

Galve and Abárzuza say the previous verdict, that there had been a prior consent on the part of the victim but that the gang had ‘gone too far’, was incorrect, since ‘the plaintiff reacted in an intuitive manner’ in keeping with the ‘circumstances in which she found herself’ and which led to ‘a stalling of her reasoning faculties’ that ‘unleashed a reaction of disconnection and dissociation with reality’ – coinciding with the women’s association’s revelation of ‘freezing’ being a common response to a rape.

To this end, say the dissenting judges, there would have been ‘an absence or total inexistence of consent on the part of the victim’, and that in her ‘trapped’ predicament she would have realised that ‘any attempted opposition on her part would have been futile’, especially as she would not have been able to attract the attention or help of any third parties and given the ‘superior strength’ of ‘five men of a much stronger physical constitution’ who ‘manifested their deliberate decision to abuse another person’s body to satisfy their own appetites’ and ‘without needing to use any kind of weapon or tangible threatening object’.

Aggravating factors cited by Galve and Abárzuza, as well as that of intimidation by number, age and strength and the impossibility of a safe escape or outside help, include that of ‘humiliation or degrading treatment’ – being ‘penetrated simultaneously by more than one person on several occasions’ and filmed on five mobile phones, actions which show ‘an undeniable contempt for her dignity’ and which ‘increased the level of humiliation to a notable and unnecessary degree’.

Further proof of ‘degrading treatment’ which the opposing judges consider an aggravating factor is that the five ‘left the victim on the ground half-naked’ and that one of them ‘took advantage of the situation to steal her mobile phone’, removing the memory cards and dumping them, ‘not only out of covetuousness’ but also ‘with the clear intention of preventing her from seeking immediate help’, so that nobody would catch up with them in time – and, in particular, considering she was in a city she was not familiar with several hundred kilometres from home.

As well as a sentence of 14 years and three months for rape, Galve and Abárzuza consider the ‘Herd’ member who stole the girl’s phone and removed the memory cards should face an extra two years for ‘intimidation’, since they do not consider his action as merely theft for personal gain.

These two and three other male judges were in charge of the case, but a three-to-two vote means the initial, more lenient verdict stands.

The victim originally said she did not want to carry on with the appeal, feeling that she had suffered enough and could not face being ‘judged’ over and over again, but her lawyer believes she has a good chance of eventual success and that this would set a valuable precedent protecting future rape victims.