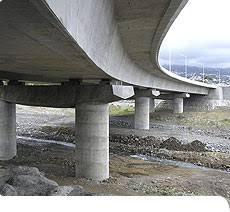 A database held by the Spanish government suggests that there are 66 road structures in Spain, many of them bridges, with serious signs of damage that could compromise their safety.
The figure represents just 0.29% of the nearly 23,000 bridges, viaducts, overpasses and underpasses built on roads that are managed directly by the Spanish state, which says there is no risk of collapse.
Of the 66 structures, 17 have already undergone repairs, one is being currently fixed, and another one has been torn down as it was no longer necessary because it was located on a secondary road, according to the Public Works Ministry.
The collapse of a bridge in Genoa in Italy last August has drawn attention to the safety of road infrastructure.