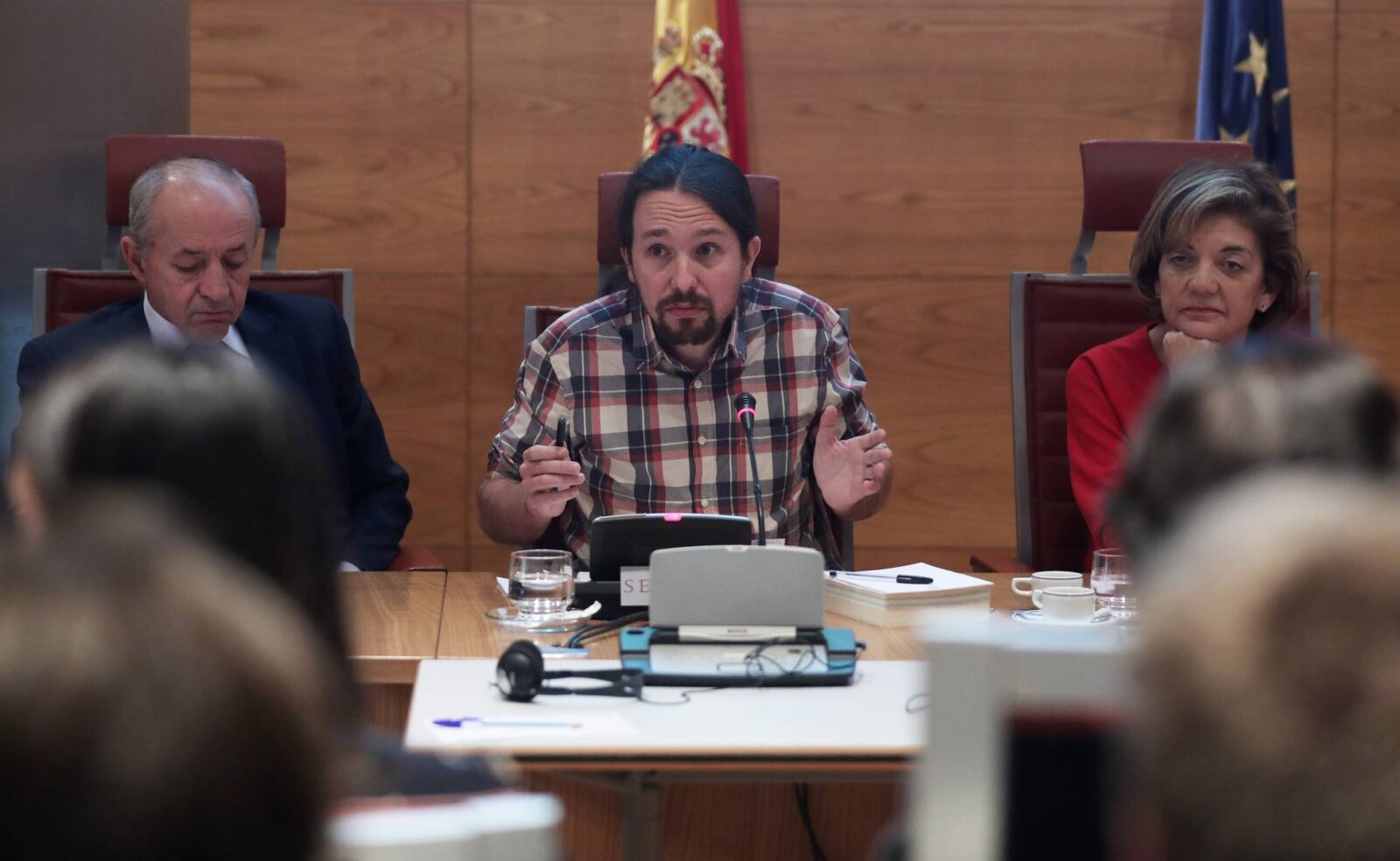 During an ill-tempered session led by a Popular Party senator, Pablo Iglesias denied any irregularities but admitted he “didn’t agree with some things I said in the past”

The leader of the anti-austerity party Podemos, Pablo Iglesias, appeared on Thursday before a Senate committee investigating party financing. The session, which was convened by the conservative Popular Party (PP), was aimed at shedding light on alleged financial links between the leftist political group and Venezuela.

“If the question is whether financing for Podemos came from the Venezuelan government, then the answer is no,” Iglesias stated during a testy question-and-answer session, which was being directed by Luis Aznar, a PP senator and spokesperson in Spain’s upper house of parliament.

The PP senator tried to bolster his accusations against Podemos by showing videos from a Venezuelan TV channel during which the founder members of the Spanish anti-austerity party are mentioned, and Iglesias is seen praising former Venezuelan President Hugo Chávez. “I get a warm feeling imagining you watching this channel, tucked up under a blanket,” joked Iglesias in response to Aznar’s accusations. “These are personal opinions,” he said of the recordings. “I don’t agree with some of the things I said in the past. The current political and economic situation of Venezuela right now is dire. To rectify in politics is a good thing.”

Aznar also drew attention to statements made a week ago by the exiled head of the Venezuelan Supreme Court, Miguel Ángel Martín Torbatú. The magistrate spoke about the Foro de São Paulo, which he said was promoted by “the extreme left” in the 1990s, as a platform to spread its ideology throughout the world via funds in countries such as Venezuela, Cuba and Nicaragua, and to finance parties – “even in Spain.” “If anyone is saying that this forum financed my party I can unequivocally say that it did not,” Iglesias responded.

“If the question is whether any foreign government, or any outside organization [funded the party], or if Podemos had any kind of illegal financing, the answer is no,” Iglesias continued. “And I have the proof here.” The head of the party brought with him reports from Spain’s Audit Court – responsible for monitoring party financing – and the audits that had been carried out on Podemos. He produced as many as 10 lawsuits that had been dismissed by the courts relating to accusations brought by the PP.

Aznar insisted on focusing on work that Iglesias did before becoming the leader of Podemos. But each time, the politician gave the same response: “I am here to answer questions about the financing of my party.”

The tensest exchange came when Aznar alluded to “evidence that is in the hands of Interpol,” in relation to Venezuelan financing that Podemos allegedly received via the CEPS foundation (Center of Political and Social Studies). The senator was referring to funds of more than €7 million received by the foundation – for which a number of Podemos leaders, including Iglesias, worked in the past – between 2003 and 2011. “You took money from the foundation which in turn took money from Venezuela, and these documents are in the hands of Interpol,” Aznar stated. “You left the CEPS foundation the day that you set up Podemos, because you knew that from that moment on you wouldn’t be able to take that money legally. There is official documentation about this that we have in our power.”

Iglesias responded by citing the PP’s appalling track record in terms of corruption. “It’s legitimate for the PP to try to sow doubts,” he said. “But it is strange for the party with more corruption convicts in the history of [Spanish] democracy to propose an inspection of the finances of the rest of the parties.” He went on to read out the sentence issued by a court in a case overseen by Judge Manuel Marchena. “Not even Marchena, who is one of yours, found evidence of illegal financing by Podemos.”

While CEPS was indeed engaged in consultancy work for the Venezuelan government, Iglesias has always denied that any funds it received were used to set up Podemos, which was created in March 2014 in the wake of the Indignados protest movements in Spain against corruption and inequality. The party currently holds the third-highest number of seats in Congress, with 67. The PP has 134 and the governing Socialist Party (PSOE) has 84.

Iglesias offered financial data from the Audit Court, relating to the party’s expenditure on the European elections of 2014 – the year of its foundation, and the scene of its first and unexpected, success. Podemos spent €134,196 on its campaign and secured five seats – €26,832 of investment per seat. The PP, he continued, had to invest “€708,000 per member of the European Parliament” in those polls.