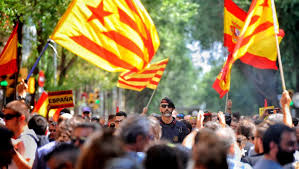 Ministers will gather in the Catalan capital on December 21, triggering concern about street protests

December 21 has become a key date for the future of Catalonia, and the relationship between the regional and central Spanish government. Prime Minister Pedro Sánchez has decided to hold his weekly Cabinet meeting on that day in Barcelona, potentially causing a massive headache for the regional police force, the Mossos d’Esquadra, who will have to guarantee that they can maintain public order.

The self-styled “Committees for the Defense of the Republic” (CDR), a pro-independence protest group that has already staged a number of demonstrations in the region, has called for a “battle” on the day to stop the meeting going ahead. Via social networks and their internal communication channels, the CDR have called on supporters to be there “first thing in the morning” using the hashtag “let’s overturn the regime.” “On 21D we will be… ungovernable,” one of their messages reads.

At the weekend, the CDR blocked a highway and tampered with toll plazas, coinciding with a national holiday that saw increased traffic volume on Spain’s roads. They were protesting against the ongoing pre-trial incarceration of the politicians and pro-independence leaders who were involved in last year’s illegal referendum on secession from Spainand subsequent unilateral declaration of independence. Several of the men in prison have begun a hunger strike.

The Mossos were criticized by the central government for not intervening in the demonstrations at the weekend. The Spanish executive subsequently sent three letters to Catalan authorities lamenting the “neglect of duty” on the part of the Mossos, and warning that if the regional government does not guarantee public safety, the Interior Ministry will send in officers from the National Police force.

If the prime minister gets his way, the Cabinet meeting on December 21 – the second to be held outside of Madrid, as part of a plan by Sánchez to bring central government closer to the regions – will take place in Llotja de Mar, which is located in the social and political heart of the city. At the first meeting on Tuesday between the Mossos and the central government delegate in Catalonia, Teresa Cunillera, the police suggested an alternative venue: the Palacete Albéniz, located away from the city, on the Montjuïc mountain. The authorities believe that this will be a simpler place to protect.

What’s more, two of the most touristic neighborhoods of Barcelona are nearby: Born and Gótico. Both are packed with narrow alleyways, making any kind of public order intervention hugely complicated.

According to sources from the central government delegate in Catalonia, the executive of Pedro Sánchez has chosen the old Barcelona stock exchange building in Llotja de Mar for the meeting given that it is “one of the most emblematic buildings in the city and representative of the culture of Barcelona.”

In contrast, the Mossos’ choice of venue, the Palacete Albéniz, is in an area far from the nearest Metro station, and is surrounded by wide avenues. The police would easily be able to control the access routes to the site, and could even land a helicopter inside the building.

The Mossos are already preparing the security measures for the meeting, and will call on all the resources available, working with the National Police and the Civil Guard, who were also present at the meeting with the central government delegate.

The central government may send extra officers from the two forces in addition to those already stationed in the region. The main aim will be to stop the center of the city from grinding to a standstill.

Another issue on the day will be responding to possible protests in the rest of the region. Depending on the amount of people who come out to demonstrate, the Mossos may be limited in terms of their capacity to react. This was the case during a strike that was called on November 8, 2017. A number of freeways were blocked by protestors, as well as the high-speed AVE train lines in Girona and Barcelona. In many places, the Catalan police – who were under the control of the central government in the wake of the unilateral declaration of independence in the region – were unable to intervene.

The meeting has been announced at a time of simmering tensions between the central government in Madrid and Catalonia. In addition to the CDR protests on the weekend, Catalan premier Quim Torra  added more strain by suggesting the way toward independence for the region is the “Slovenian path,” given that the breakaway of the country from Yugoslavia ended with a conflict in which nearly a hundred people lost their lives.

Regional government minister Elsa Artadi said this week that the planned Cabinet meeting had caused “unease” among sections of Catalan society because the date coincides with the first anniversary of the December 21 regional elections, which were called by the central government of then-Popular Party Prime Minister Mariano Rajoy after the region’s powers were suspended. “It has an element of provocation,” said Artadi.

The central government, however, has been trying to project an air of normality about the Cabinet meeting. “We are also the government of Catalonia,” said Deputy Prime Minister Carmen Calvo in November, when she announced the plan, pointing out that such a meeting had already been held in Andalusia.