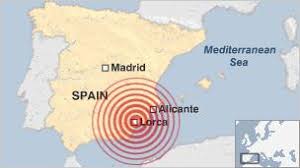 Tremors could be felt across Spain’s south coast yesterday (Thursday) after a 3.5 mbLg earthquake was recorded in Lorca, Murcia at around 9am.

According to Spain’s National Geographical Institute, classrooms in schools in Lorca were evacuated as a precaution as the earthquake struck.

Furniture reportedly shook and buildings vibrated after the earthquake originated just west of the city.

However, no major damage has been reported in Murcia province as of yet.

Numerous members of the public reportedly felt the tremors all over Murcia province, with some reports coming from Huercal-Overa in Almeria.

The earthquake reportedly stretched across a 60km radius.

The earthquake comes 7 and a half years after the haunting events of 2011, when two 4.5 and 5.1 earthquake killed nine and injured 324 in Lorca.