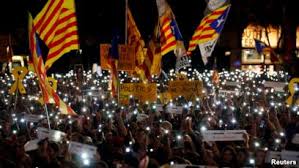 Four former Catalan leaders who are on a hunger strike in prison awaiting trial for rebellion over their role in last year’s independence drive have sent 40 letters to European Union authorities to denounce their situation.
In their message the four men detail how Spain’s Constitutional Court is, in their view, “blocking” all their appeals, in order to prevent them from getting their cases to the European justice system.
The letter, a copy of which has also been mailed to Spanish Prime Minister Pedro Sánchez, says that their appeals to the Constitutional Court should normally be ruled on in 30 days, but have instead been on hold for over a year. For this reason, the activists say they’ll appeal the delay itself before the European Court of Human Rights in Strasbourg.