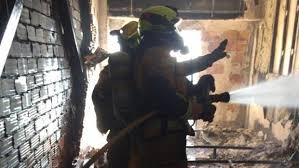 Four people were injured and two-hundred evacuated from the Poseidon Playa Hotel in Benidorm, after a 17th floor fire took place on Saturday 5th January.

The incident occurred at approximately 14:30pm after, for unknown reasons, a fire started in of the busiest hotels in Alicante’s Benidorm (Spain).

The affected were two workers from the hotel and two local police officers that were taken to a local Benidorm hospital by a Basic Life Support ambulance.

The fire started in a room on the 17th level of the hotel but had later extended to the rest of floor.

As a precautionary measure, a full evacuation of the hotel was executed with around 200 people being vacated from the premises.

The hotel guests waited outside of the hotel whilst the extinguishing tasks were carried out.

The flames were put out by local firefighters at approximately 15:30pm but the 17th floor was completely burned out.

According to the ‘Consorcio Provincial de Bomberos’, the guests that were staying on the 17th floor have been reaccommodated but the rest of the clients have been able to return to the hotel to enjoy the rest of their holidays.