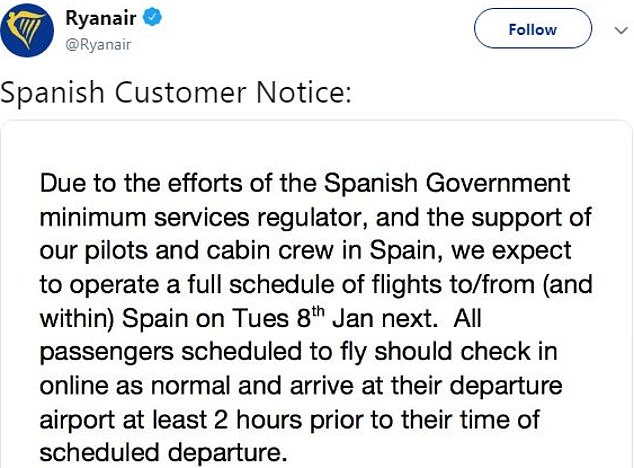 Ryanair passengers travelling to and from Spain may be hit by travel disruption this week because cabin crew are staging three 24-hour strikes.

The first strike will be tomorrow (Tuesday) and further walkouts will be staged on January 10 and 13.

But despite the industrial action Ryanair claims that it expects to operate a full schedule of flights tomorrow both to and from Spain and within the country.

However, unions USO and Sitcpla, whose members are striking over pay and conditions, say they cannot see how the no-frills airline will manage to avoid any disruption.

Last year, the Dublin-based carrier suffered a number of strikes by cabin crew and pilots, forcing it to cancel hundreds of flights.

But they will only operate 25 per cent of flights to and from Spain that are over 500 kilometres (310 miles).

Ryanair said in a statement: ‘Due to the efforts of the Spanish government minimum services regulator and the support of our pilots and cabin crew in Spain, we expect to operate a full schedule of flights to/from (and within) Spain on Tuesday January 8.

‘All passengers scheduled to fly should check in online as normal and arrive at their departure airport at least two hours prior to their time of scheduled departure.’

However, Mauricio Gabala, a spokesman for the Sitcpla union explained that he did not expect the airline to avoid disruption to passengers.

He added: ‘Many passengers will have problems.’

Last month, both the USO and Sitcpla unions accused Ryanair of ‘absurd and childish behaviour’ and ‘throwing tantrums’ for not coming to an agreement on a new pay and conditions deal for their members during mediation.

They claim around 1,800 Ryanair staff at Spanish bases ‘suffer every day, with worse working conditions than the rest of the workers because Ryanair does not apply Spanish legislation’.

Criticism has also been levelled at the Spanish Government for ‘failing to tell Ryanair that it has to comply with the law in the country where it operates and from which it obtains a large part of its benefits in Europe’.

On September 28, a 24-hour strike by Spanish Ryanair staff affected 30,000 passengers and 250 flights were cancelled.

The unions later hailed the strike as a success although Ryanair said the disruption caused had been minimal and 92 per cent of its services had operated as normal.

The strikes come just days after the carrier finished bottom of the respected Which? annual airline survey for the sixth consecutive year.

In the consumer champion’s poll passengers gave the budget carrier the lowest possible rating for boarding, seat comfort, food and drink, and cabin environment – leaving it with a dismal overall customer score of 40 per cent.