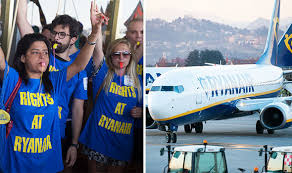 Unions representing Ryanair’s 1,800 cabin crew in Spain called off the 24-hour strike planned for today but say they will go ahead with planned stoppages this Thursday and Sunday.
The unions are demanding local contracts under local law rather than the Irish contracts Ryanair uses widely.
The budget carrier has so far managed to clinch labour agreements with staff in several countries including Britain, Germany, Portugal and Italy.
Spain is Ryanair’s third biggest market and has 13 of its 89 bases in the country.