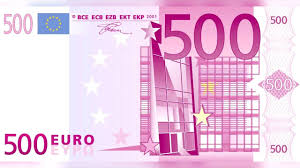 Central banks in Eurozone countries will start to withdraw €500 notes from circulation from January the 27th, except in Germany and Austria.
They’ll remain legal tender, even though the European Central Bank stopped producing them from the end of 2018, but if high street banks receive any, they’re required to send them to the main bank of that country which will then return them to base.
Until a few years ago, Spain was the country with the most €500 notes in circulation, but they have become extremely rare and now only represent 2.4% of all the banknotes in use worldwide.
Meanwhile, the ECB will release the new design of 100 and €200 notes from May this year, following the same format as the new 5, 10, 20 and €50 notes.