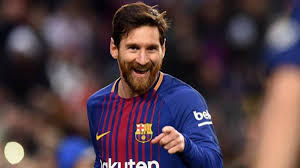 Lionel Messi scored his 400th La Liga goal yesterday, a total his coach Ernesto Valverde described as “monstrous”, as Barcelona terrorised Eibar to reclaim their five-point cushion at the top of the table.
Messi scored after being teed up by Luis Suarez, who added two goals to his own tally either side of the Argentinian marking another historic record at the Camp Nou.
The 3-0 victory saw Valverde’s side restore their advantage over Atletico Madrid, who had briefly cut the gap to two points after beating Levante earlier in the day.
Real Madrid won too, beating Real Betis, but remain 10 points adrift of Barcelona.